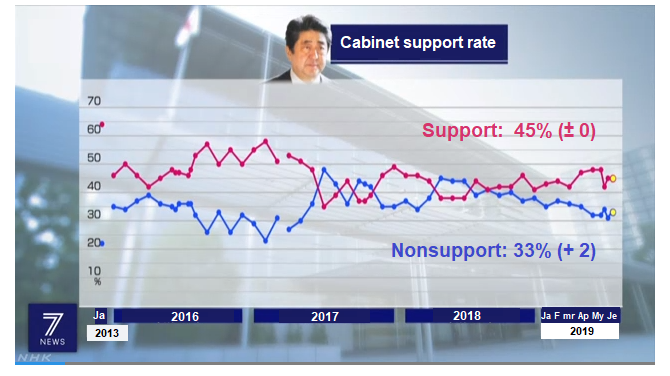 According to the NHK public opinion survey held in advance of the Upper House election set for July 21, a total of 55% of pollees said they “will definitely go vote” or “have already cast early votes” in the election, lower than the figures at the same time prior to the previous Upper House election held three years ago.

NHK conducted a nationwide survey over the three-day period of July 5–7 ahead of the Upper House election on a computer-aided random digit dialing (RDD) basis targeting men and women aged 18 or over with calls placed to landline and mobile phone numbers. Valid responses were received from 2,060 of the 3,756 people polled. The valid response rate was 55%.

According to the survey, 45% of pollees support the Abe cabinet, the same result as in the poll conducted a week ago. Those saying they do not support the cabinet increased by 2 points to 33%.

A total percentage of respondents who said they will “definitely go vote” or “have already cast early votes” stood at 55%, which is 8 points lower than the figure found in a poll taken at same time prior to the previous Upper House election held three years ago. No direct comparison can be made, however, as the polling methodologies differ.

Presented with six policies and asked which they will emphasize most in deciding how to vote, 32% said “social security,” making it the most frequently given response. This was followed by “economic policies” at 22%, “consumption tax” at 19%, “foreign policy and security” at 8%, “constitutional amendment” at 7%, and “nuclear power policy” at 2%.