TOKYO — Poor voter turnout in Japan in recent elections has been blamed by analysts on political apathy among young people, but others say a fall in the number of polling stations has also had an impact.

The data show a correlation between a decrease in polling stations and reduced voter turnout, with a particular impact on regions that have higher proportions of people 65 and older. While election participation tends to be low in advanced economies, Japan confronts the challenge of sustaining democracy with a shrinking, graying population.

In Obira in Hokkaido, with a population of 3,000, the number of polling stations will be halved for the coming election from 2016 due to the need to cut costs. As a result, the nearest voting station for some will be more than 5 km away from their homes. 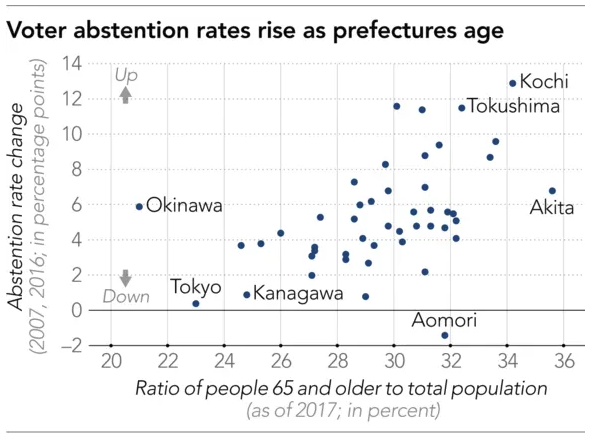 A decrease in the number of voting stations tends to discourage older votes from going to the polls due to the distance and inconvenience involved. This is particularly the case in underpopulated areas that tend to have higher populations of seniors. In Akita, Tokushima, Kochi and other prefectures with large elderly populations, the rate of voting abstention rose sharply. 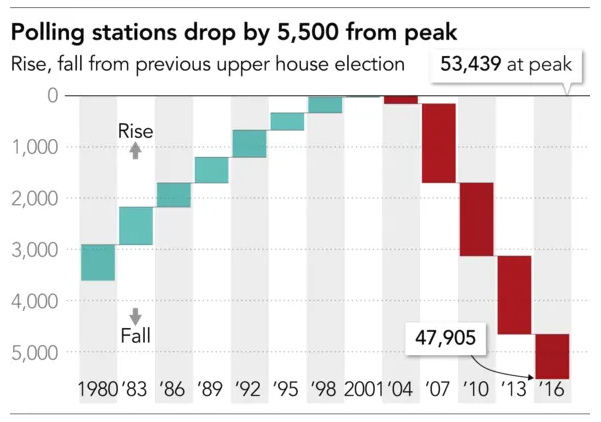 Some local governments have begun to introduce mobile polling stations to correct this problem given Japan’s aging population. But an official of the electoral management committee in Obira admitted that not every voter can be reached: “The area of our town is so large that we cannot visit all places.”

In the 2018 midterm elections in the U.S., the Republican Party was criticized for attempting to discourage minority voters from going to the polls by taking measures such as relocating polling stations from areas that have large Hispanic populations.

Japan has 11.04 million people aged 80 years and older. That number is forecast to reach 16.29 million in 2035. With a “super-aging” population, Japan needs to figure out how to ensure its democracy serves everyone.