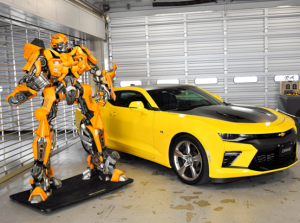 Asahi reported online on the robust sales of Chevrolet Camaro in Japan recently, noting that the GM sports car is in high demand especially among young people. As those aged 39 or younger accounted for 30 percent of the some 600 who bought the model last year, the data reportedly pointed to the unusually high popularity of the American vehicle among youths in the European-dominated imported car market in Japan. A GM Japan spokesperson reportedly voiced surprise by saying that drivers aged 50 or over were the initial targets of Camaro, which is priced at about 5 million yen ($46,000) or higher, which is a large sum for most young customers. The daily investigated the strong demand among young users, finding that they particularly like its connection with the movie series “Transformers,” in which a Camaro is transformed into the Autobot Bumblebee. A Japanese youth reportedly said he bought the model because of its “uniqueness.” A local auto journalist commented on Camaro’s market success saying: “The model bears a very strong ‘American flavor.’ If U.S. automakers put on the market very individualistic models that can’t be readily emulated by rivals, Japanese youth may be tempted to buy them even if they are not inexpensive.”