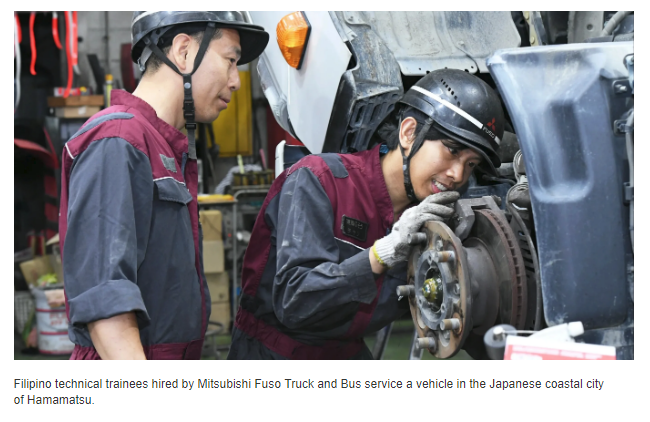 TOKYO — An influx of foreign workers has helped Japan cope with the nation’s labor shortage, as working-age Japanese decline to their smallest share of the country’s population on record.

The number of Japanese ages 15-64, or the working-age population, stood at 74.23 million as of Jan. 1, the internal affairs ministry reported Wednesday, a decrease of 613,028 from a year earlier. This represents a mere 59.5% of the total population, an all-time low that reflects the aging of Japan’s public.

By contrast, the population of working-age foreigners in Japan jumped by 149,650 to reach 2.26 million. This group encompasses 85.1% of all foreigners in the country, and a full 31% of Japan’s foreigners are in their 20s.

Over the past five years, the number of working-age Japanese shrank by 4.13 million, a loss partly offset by the addition of 580,000 working-age foreigners in that time.

The Japanese population, excluding foreign residents, shrank for the 10th year in a row, to 124.77 million last year. The decline of 433,239 people is the largest since the government started tracking the data in 1968. Deaths also outnumbered births in Japan last year by a record 442,564.

Reflecting the trend, some localities have seen a surge in foreign-born residents. The foreign population in Shimane Prefecture on the western Sea of Japan coast grew by 15.4% last year, the fastest rate among all prefectures. A Murata Manufacturing subsidiary in the city of Izumo reportedly added hundreds of Brazilians of Japanese descent to its workforce, tasked with producing electronic capacitors.

Shimukappu, a village on the northern island of Hokkaido, boasts the highest concentration of foreigners among all Japan’s localities at 26.1%. The village is home to a major ski resort popular among inbound tourists, and the foreign employees who serve the clientele live in the area. Shimukappu is one of 12 municipalities nationwide where foreigners make up at least 10% of the population.

Foreign workers also are bringing high-level skill sets. NEC’s central research laboratories have hired graduates directly from India’s technology institutes since 2012. The company says it plans to expand recruitment from the schools, which have become a source of tech talent for employers globally.

At the end of last year, 350,000 foreigners held visas reserved for those demonstrating expert knowledge in management, technology, the humanities, international affairs and other areas, data from the Ministry of Justice shows. That number grew by 110,000 over three years due to efforts by Japan’s government and business community.

The annual population survey by the internal affairs ministry is based on data contained in basic resident registries. A full census is conducted every five years.