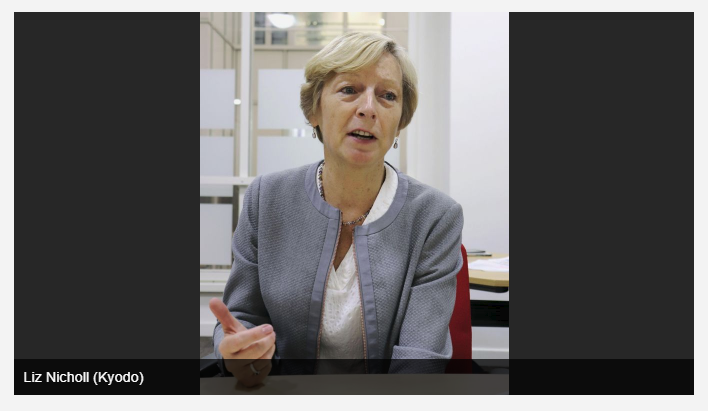 LONDON — One of the key architects of Britain’s recent Olympic success has urged Japan’s athletes to harness the “hugely powerful effect” of performing in front of their home crowd at the Tokyo Games next year.

Liz Nicholl, who as head of UK Sport drove Team GB from 36th in the medal table in 1996 to second in 2016, said hosting the 2012 Games was the seminal moment in Britain’s resurgence as an Olympic force.

Nicholl, who stepped down as CEO on Friday after 20 years at the body that oversees elite British sport, said Japan must “grasp the opportunity” of hosting the Summer Olympics for the second time.

“I am sure that Japan will surprise itself in terms of the results, because we surprised ourselves in terms of the number of gold medals we won,” Nicholls said in an interview with Kyodo News at UK Sport’s London office.

“It’s that difference the home crowd can make to someone — it can be the difference between a fourth and a bronze, or a silver and a gold. You have to grasp that opportunity, because once you have, it has a hugely powerful effect.”

Nicholls said the move to use National Lottery funding to support Britain’s Olympic and Paralympic athletes after the 1996 Atlanta Games was the first of two key moments.

“But the big shift came when, in 2005, we won the bid to host the games in London. It brought the nation together like never before,” she said.

“Politically there was cross-party support and there was another injection of government funding. The opportunity to focus on a long-term goal to inspire the nation in 2012 meant all of the resources and people and finance and energy had to be aligned behind that.”

Japan is aiming to jump up to third place in the medal table in Tokyo, having finished sixth in Rio de Janeiro in 2016. Nicholl said she would be happy to see such success, and offered some advice to the 2020 hosts.

“In the year leading into the games you should wrap the very best support around the athletes with potential to medal,” she said. “It is always great to see a home nation do well…so it would be fantastic (if Japan does well) and we would be absolutely delighted for you.”

“You should celebrate every medal — don’t get hung up about whether it is gold, silver or bronze — celebrate every one because they are all really important, each one is an amazing achievement. If you focus too much on gold medals you can start to be disappointed by silvers, which is ridiculous.”

Nicholl admitted she had regrets about the scandals involving allegations of bullying within British sports federations — such as those for cycling and swimming — that have engulfed British sport in recent years.

But she pushed back against the suggestion that such alleged “climates of fear” had been a byproduct of having an obsession with winning medals at any cost.

“No, I think it was about communication,” Nicholl said when asked if the focus on success had been too intense. “It was basic human interaction and communication that wasn’t being well managed.”

“I don’t think it’s about the focus on medals and success because every athlete wants to win medals. The big learning has been that it is important to focus on the development of people who are in key roles, not just assume that they have the rounded skills as well as the high technical competence.”

Nicholl, who said it is “within the range of possibility” that Britain could improve on their medal haul from Rio next year, also tried to take the pressure off young athletes like British-Japanese skateboard prodigy Sky Brown.

Brown, who has a British father and Japanese mother and lives in Miyazaki, is on the British skateboarding team and hopes to qualify for the Tokyo Games in 2020, when she will be just 12 years old.

“It would be very unfair to expect anything from a very young and talented skateboarder,” Nicholl said. “First of all she has to be selected to be part of Team GB for the games, then I just hope the environment allows her to demonstrate her amazing skills.”

“It would be a massive story if she were to be successful, but we cannot put any expectations on a very young athlete. They will have their own high expectations.”