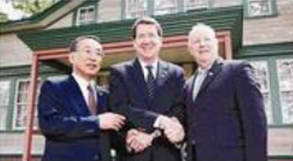 U.S. Ambassador to Japan William Hagerty visited Kitami City, Hokkaido, on July 10 and toured Pierson Memorial House. George and Ida Pierson were Christian missionaries from the United States [who made Kitami their home base for about 15 years. Kitami City renovated their home and opened it to the public as the “Pierson Memorial House” in the early 1970s.] In the house are displayed the Piersons’ personal possessions as well as items related to their missionary work.

Ambassador Hagerty visited Hokkaido to enhance his understanding of Hokkaido culture and history. He was welcomed to the city by Kitami City Mayor Naotaka Tsuji and J. Christian Bollwage, mayor of Elizabeth City [New Jersey], which is Kitami’s sister city.

Ambassador Hagerty saw the organ the couple used to accompany their hymn singing and the Piersons’ Japanese translation of the Bible. The Ambassador commented, “I am very honored to have a view into this part of the history between our two nations.”

The Ambassador and his party also visited the Hokkaido Museum of Northern Peoples in Abashiri City.