Commentary: Abe’s art of the deal with Russia 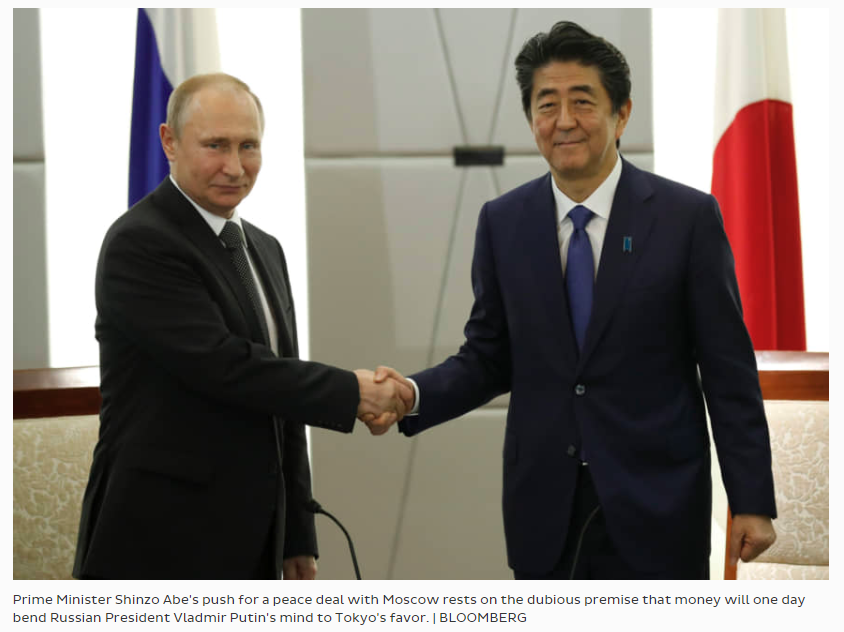 WASHINGTON – In contrast with the pomp at the Group of 20 summit in Osaka last month, an air of indifference dominated the meeting between Prime Minister Shinzo Abe and Russian President Vladimir Putin.

Just like the previous meetings between the two leaders, the Abe-Putin summit held on the G20 sidelines ended with no tangible progress made toward a peace treaty, let alone resolution of the long-standing dispute over the four Russian-held islands off Hokkaido.

Abe immediately faced routine criticism at home for failing once again to achieve a diplomatic breakthrough, but the real significance of the latest summit — the 26th between them — lay in his conscious decision to skirt around the territorial issue while seeking to accelerate economic cooperation.

It signified a shift in Abe’s “new approach to Russia” with deal-making summitry eclipsing diplomacy, leading the prospect of shelving the territorial dispute to increasingly become inevitable.

Abe’s pursuit of a breakthrough in the territorial dispute was a questionable proposition to begin with. Since the 1956 Japan-Soviet talks, the problem over what Moscow calls the southern Kuril Islands emerged and solidified as a result of great power designs over which Japan had no control.

Moreover, given the tenuous U.S.-Russia relationship, the impasse in the Far East would have been expected largely due to Tokyo’s deepening alliance with the United States, which can establish its military presence anywhere under Japanese sovereignty.

Paradoxically, Abe’s bid for diplomatic gains in recent months has allowed Putin to expose and exploit this fundamental contradiction inherent in Tokyo’s negotiating position of pursuing concessions from Russia on the territorial row while deepening its security ties with the U.S. The Russian leader demanded that Tokyo promise it won’t allow the Americans to build their military bases on the disputed islands were they to be returned to Japan.

Putin essentially demanded an impossible prerequisite, challenging Abe to undo the very foundation of postwar Japan’s national security strategy presumably in exchange for the disputed islands. Significantly, Putin began to play up his objections to the Japan-U.S. alliance after Abe pulled off a historic concession last November in defiance of Tokyo’s long-standing position calling for the restoration of Japanese sovereignty over all four islands.

The Russian strongman’s foot-dragging merely confirmed his policy of no compromise, which has been emboldened by the country’s renewed confidence in its global military clout. In judo parlance, Putin gained a waza-ari over Abe, forcing him into an untenable position for an ippon.

The territorial dispute itself is inherently entangled in the age-old great power machinations and dealings that Tokyo’s diplomacy alone could scarcely hope to upend.

Abe initially sought to overcome such obstacles with his signature “new approach” to Russia unveiled in May 2016 that added economic cooperation in hopes of bolstering Tokyo’s negotiating position. The problem with this approach was the notion that money would somehow compensate for Japan’s inferior hard power behind its stumbling diplomacy.

Fast forward to last month. Abe had plunged himself in the vicious circle of engaging Putin with economic largesse and returning home empty-handed — and inadvertently — compromising the very foundation of Japan’s national security strategy that is the Japan-U.S. alliance. The geopolitical reality increasingly overshadowed the rosy picture painted by the Japanese leader’s gambit.

Abe’s own imbroglio posed him a fundamental question of whether to cut the “Kurillian knot” — in other words, whether to shelve the territorial dispute in return for a peace treaty. Not cutting it risks Japan becoming irrelevant on the global stage, given Russia’s growing geopolitical clout from the Middle East to cyberspace in recent years. It is an impossible position for Japan, yet ultimately inescapable.

Abe chose the former option half-heartedly at the latest summit. He did so not with a resounding public declaration but by furtively bypassing the very territorial dispute itself. Meanwhile, his offer of economic cooperation remained, leading Tokyo to fund 75 percent of the $3 billion Japanese investment in Russia’s Arctic LNG 2 project owned by the country’s major gas company, Novatek.

This unprecedented investment deal was sealed despite the ongoing U.S. sanctions on Novatek, signifying Abe’s willingness to defy the diplomatic consensus held by most Western countries toward Russia. In short, the Japanese leader began to engage more in deal-making than diplomacy.

Abe’s newfound deal-making push is no guarantee for achieving his aim of making the ultimate peace deal with Russia. It still rests on the premise that money will someday change Putin’s mind to Tokyo’s favor. Japan’s economic presence in Russia remains minuscule and pales in comparison with that of China despite Tokyo’s recent initiatives for boosting bilateral economic cooperation. Moreover, Japanese companies themselves may balk at Abe’s growing deal-making gambit in a country rife with risks.

At the most fundamental level, the Japan-U.S. alliance will remain the overarching factor over which neither side can concede. Apart from these obvious problems, Abe’s quiet policy shift will set irreversible precedents for Tokyo’s territorial claim.

Ironically, Abe’s emerging indifference to the fate of the four disputed islands is tantamount to his capitulation to Putin’s September 2018 offer of a peace deal without preconditions. Abe’s about-face over the islands has virtually sealed Tokyo’s diplomatic defeat, effectively reversing decades of previous territorial negotiations dating back to 1956. His policy shift has unmistakably set the trajectory of the future of the bilateral talks to hereafter revolve solely around economic deals in hopes for a peace treaty.

The silver lining for Tokyo is the possibility of concluding a conditional peace treaty as proposed by Putin last year. Such an arrangement would allow Japan to achieve peace with honor by at least retaining its territorial claim without sacrificing a peace treaty itself.

Securing a peace pact will ultimately require strategic prudence rather than unmitigated deal-making, posing for Abe a true test of his statesmanship. Indeed, accomplishing such an elusive task would be a political coup against postwar Japan’s subordinate decision-making position inherent in its alliance with the U.S., with infinite implications for the country’s future trajectory beyond Abe’s personal legacy.

The denouement of the diplomatic drama in the Far East quietly occurred when a lingering geopolitical thorn in the region suddenly found itself on the ash heap of history. It all happened unexpectedly at a time when all eyes were on the grandeur the Japanese leader carefully orchestrated as he hosted world leaders in Osaka. The plot twist largely went unnoticed by a public still awaiting official explanation on the policy shift and was perhaps the greatest political legerdemain Abe has ever pulled off.

Abe may have showcased his deal-making prowess, but the country has crossed the Rubicon without a clear strategy to secure peace with Russia. While reflecting the evolving geopolitical reality constraining Tokyo’s negotiating position, his latest maneuver was tactical masquerading as strategic absent leverage over Russia backed by hard power. Ultimately, the Japanese leader will need to directly confront the conundrum of the Kurillian knot. In doing so, he may well be mindful of the strategic consequences of his actions rather than merely his personal legacy.

Hidetoshi Azuma is an adjunct fellow at the American Security Project in Washington.