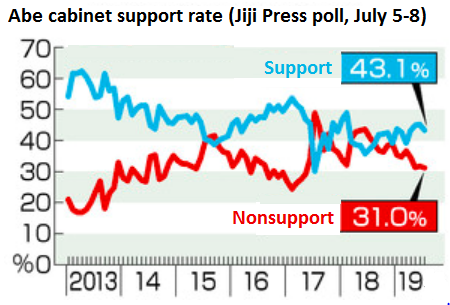 The disapproval rate edged down 0.5 point to 31.0 pct, according to the poll conducted for four days through Monday.

The approval rate was pushed down apparently by concerns spurred by a controversial Financial Services Agency report that an elderly couple living on pensions would need additional life savings of about 20 million yen.

Late in June, Abe’s diplomacy drew attention as he chaired the Group of 20 summit in the western city of Osaka. But the support rate did not rise.

Abe has made whether to start discussions on constitutional amendment an issue in the July 21 election for the House of Councillors, the upper chamber of the Diet, the country’s parliament.

Of the total respondents, 41.2 pct agreed with the idea of holding such discussions after the election, 26.3 pct disagreed, and 32.6 pct neither agreed or disagreed or were unsure.

Only 13.0 pct regarded Finance Minister Taro Aso’s refusal to accept the FSA report as appropriate, while 62.1 pct answered the opposite.

The survey also found that 29.3 pct trust the country’s public pension system, against 52.4 pct who do not.

Asked why they support the Abe cabinet, with multiple answers allowed, 20.7 pct said there is no other suitable person, 13.0 pct cited his leadership skills and 9.0 pct said they trust him.

Respondents supporting no specific political party accounted for 58.3 pct of the total, down 1.1 points.

The interview survey was carried out with 2,000 people aged 18 or above across the country. Of them, 61.7 pct gave valid answers.