NHK reports on its interview with Assistant Secretary of State Stilwell 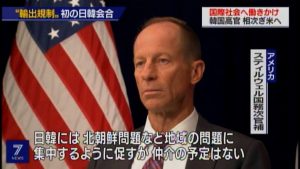 NHK’s News 7 program on Friday broadcast a report on the Japan-ROK working-level meeting on Japan’s export curbs. The report included a clip of Assistant Secretary Stilwell saying: “I don’t plan to mediate or engage, other than to encourage both sides to focus on the key issues in the region, especially with North Korea.” Later, on its News Watch 9 program, NHK aired portions of its interview with the assistant secretary in the course of a long report on the Japan-ROK working-level meeting. The broadcaster reported a claim by the ROK’s KBS that U.S. Congressional officials have made a commitment to mediate in this bilateral issue, and then aired a portion of the interview in which he was shown saying: “The U.S.’s position is that we need to do everything possible in order to prevent fissures between the U.S.’s strongest allies in Northeast Asia. We will urge both sides to find a way to return the relationship to the positive, where it ought to be.” He also stated: “If they deal with each other in good faith, the solution will be easy. First, they need to start talking.” NHK reported that Stilwell stressed that at this point the U.S. has no plans to mediate and it is adopting a position of urging both sides to resolve their issues through dialogue.

In its online report on Saturday morning on the interview, NHK said that Stilwell indicated that the U.S. does not want to see a further deterioration in Japan-ROK relations. Commenting on the ongoing spat between Japan and the ROK, he was quoted as saying that tension between the two allies is “not very helpful.” He reportedly said that the U.S. will encourage Japan and South Korea to “focus positively on areas of cooperation and get through these bumps.” NHK noted that while the ROK has been sending officials to Washington to appeal for support, the U.S. State Department has not come up with a specific response and is adopting a wait-and-see attitude.

NHK’s noon news on Saturday also took up Stilwell’s comments on the U.S.-Japan alliance during the Friday interview. He was shown saying: “The strategic situation in the Pacific is changing drastically. We need to have regular dialogue because the alliance will need to adapt to these changes.” Regarding President Trump’s remark on the “unfairness” of the bilateral security treaty, Stilwell said: “I wouldn’t say that,” but he maintained that the alliance needs to be adjusted to adapt to current conditions. NHK said he indicated that taking into account the President’s thinking, he plans to engage in broad-ranging discussions with Japan on issues relating to U.S.-Japan cooperation, including the question of increasing Japan’s share of the cost of stationing U.S. forces.