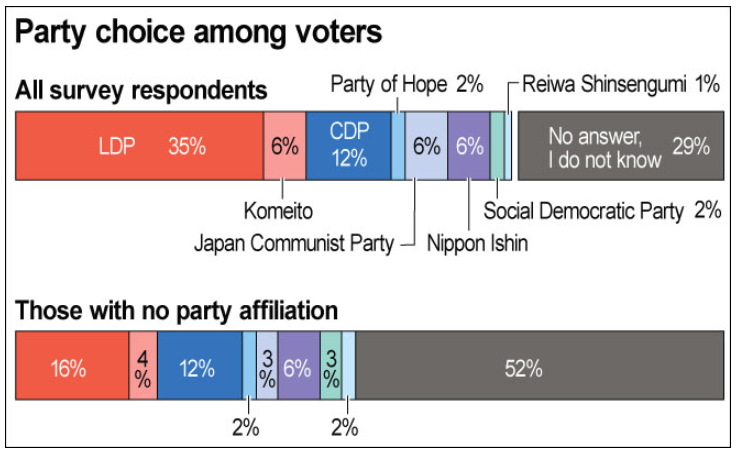 Support for the ruling Liberal Democratic Party dropped ahead of the July 21 Upper House election, but the level was still nearly triple that for its nearest competitor, according to an Asahi Shimbun survey.

The nationwide survey, conducted on July 13 and 14, showed that 35 percent of voters plan to vote for the LDP in proportional-representation constituencies in the election, down from 40 percent in a June survey.

Twelve percent of respondents said they would cast their ballots for the main opposition Constitutional Democratic Party of Japan (CDP), compared with 13 percent in June.

Among unaffiliated voters, who accounted for almost half of all respondents, around 52 percent said, “I do not know,” or did not answer, indicating they have yet to decide on their intentions on election day.

Still, 16 percent of the unaffiliated respondents said they would vote for the LDP in proportional-representation constituencies, followed by 12 percent for the CDP and 6 percent for Nippon Ishin.

The approval rate for the Cabinet of Prime Minister Shinzo Abe was 42 percent, down from 45 percent in June, while the disapproval rate was 34 percent, up slightly from 33 percent.

Among those who disapprove of the Cabinet, 28 percent said they would vote for the CDP, followed by 14 percent for the Japanese Communist Party and 9 percent for Nippon Ishin.

Only 18 percent of respondents said, “I am very much interested in the Upper House election,” unchanged from the rate in the June survey.

In a survey conducted one week before the previous Upper House election in 2016, 27 percent of respondents said, “I am very much interested in the election.” However, a simple comparison cannot be made because the survey methods were different.

For the July 21 Upper House election, Abe has pushed his proposed constitutional revisions as the main issue. To hold a referendum on changing the Constitution, he would first need approval from two-thirds of lawmakers in each Diet chamber.

Thirty-seven percent of respondents expressed hopes that the ruling parties, the LDP and Komeito, or Nippon Ishin, which supports constitutional revisions, will gain more than two-thirds of the Upper House seats, while 40 percent were against the pro-amendment side reaching that rate.

Forty-three percent of all respondents said, “The important thing in current politics is for the opposition parties to obtain more power,” while 36 percent said, “Stable power among the ruling parties is important.”

The Abe administration has come under fire over the rejection by Finance Minister Taro Aso, who is also minister in charge of financial service, of a report showing that pension payments may not be enough to financially sustain retirees.

Sixty-two percent of respondents disapprove of the Abe administration’s policies on easing people’s anxieties toward old age, while 22 percent support them.

However, among those who disapprove of the policies, 23 percent, the highest ratio, said they will vote for the LDP in proportional-representation constituencies,” compared with 17 percent for the CDP.

The survey asked about the government’s decision to tighten export controls on materials used in manufacturing semiconductors to South Korea.

Fifty-six percent supported the measure while 21 percent were against it.

Among supporters of the Cabinet, 74 percent back the tighter export controls. Among those who disapprove of the Cabinet, 43 percent support the trade restrictions and 36 percent were against them.

Sixty-five percent of males and 47 percent of females who support the Cabinet back the tightened export controls.

Among all respondents, 63 percent very much or somewhat approve of the Abe administration’s achievements in its six-and-a-half years in power, compared with 35 percent who totally disapprove or somewhat disapprove of its performance.

Among those who disapprove of the Cabinet, 71 percent gave negative marks for the administration’s time in power, while 26 percent said, “I approve it to a certain extent.”

For land-line numbers, the survey received valid responses from 517, or 49 percent, of the 1,059 households containing at least one eligible voter contacted.

Valid responses were obtained from 484, or 47 percent, of the 1,034 eligible voters reached by mobile phone. (JMH created and added the line graph.) 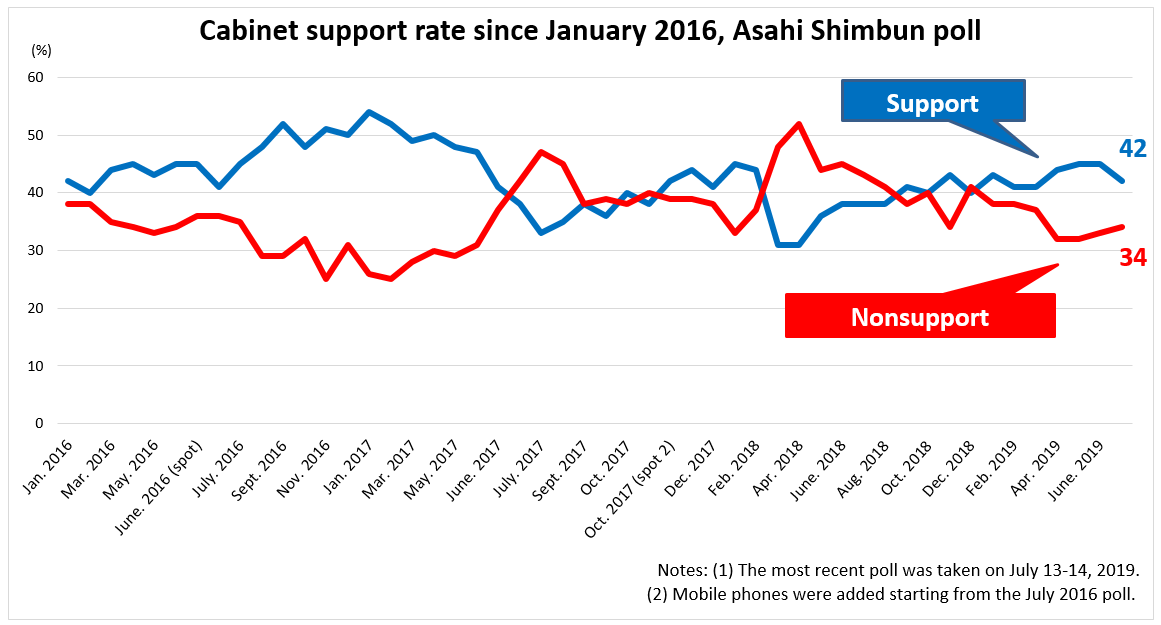