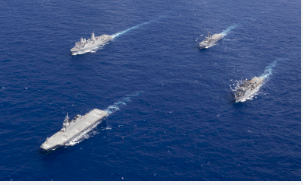 As one of its campaign pledges for the upcoming Upper House election (with voting on July 21), the Liberal Democratic Party is calling for changing the Constitution for the worse by clarifying the existence of the Self-Defense Forces (SDF) in Article 9. Under the circumstances, the U.S. military, which is conducting a real-world operation, and the SDF are working together. “Exercise Talisman Sabre 2019,” a U.S.-Australia joint exercise, is underway. The exercise will be the first time for a joint unit of the Ground Self-Defense Force and Maritime Self-Defense Force to conduct landing operation training with the U.S. Navy and the U.S. Marine Corps overseas. Akahata learned from news reported by the U.S. 7th Fleet that the Japanese and U.S. units have been acting in concert ever since  they left Japanese ports.

The exercise enters its full-blown stage from July 11 through July 24 with a large-scale landing operation and ground combat activities in parallel with the Upper House election campaign period. The homepage of the U.S. Indo-Pacific Command reported that U.S. Marines, Australian soldiers, and Japan Ground Self-Defense Force members trained in Combined Joint Forcible Entry Operations by conducting a multi-national amphibious landing under the U.S. military exercise commander on July 16.

The MSDF’s vessels and the GSDF unit that participated in the exercise have operated together with the U.S. Navy and the U.S. Marine Corps units that are capable of promptly responding to contingencies and participating in maneuvers from the western Pacific to the Indian Ocean on a regular basis in six months rotation with Japan as their base.

The SDF units participate in the exercise from June 3 through Aug. 21. USS Wasp, an amphibious assault ship and the flagship of the exercise, was observed at a berth at the U.S. Navy Yokosuka base (Kanagawa Prefecture) on May 28. The U.S. 7th Fleet homepage reported that the MSDF’s destroyer Ise and transport dock ship Kunisaki sailed together with the USS Wasp from the Philippine Sea to the Coral Sea northeast of Australia. The homepage also published an aerial photograph of the Ise and the Kunisaki sailing in formation with amphibious transport dock ship USS Green Bay and USS Ashland in the Philippine Sea on June 8.

The exercise being conducted this time is aimed at integrating the SDF into the U.S. military’s readiness posture for the joint conduct of military operations.