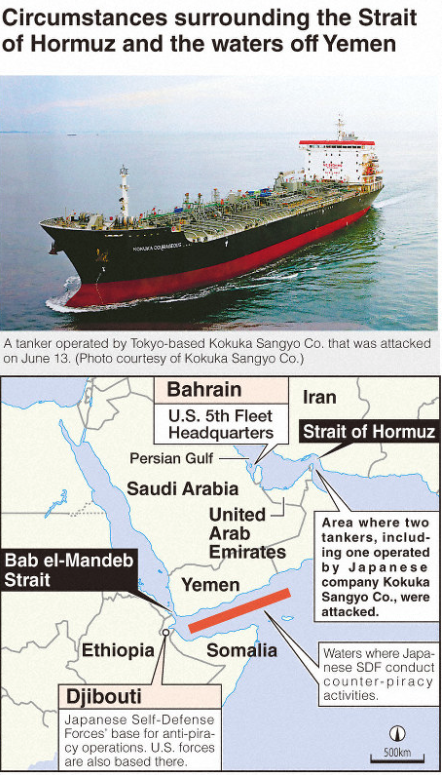 TOKYO — The United States will explain to interested parties July 19 its vision for a military coalition to protect the freedom and safety of commercial shipping through the Strait of Hormuz and the Bab el-Mandeb Strait off the coast of Yemen in the Middle East.

Japan relies on the Gulf countries for over 80% of its crude oil supplies. In a tweet, U.S. President Donald Trump even named Japan as one of several countries that “should be protecting their own ships” on the dangerous shipping lanes where the U.S. provides protection.

Dispatching the Japan Self-Defense Forces (SDF) to the area, however, remains difficult under current laws. Furthermore, by doing so, Japan runs the risk of damaging the friendly ties it has long had with Iran, putting the Japanese government between a rock and a hard place.

“Japan is working closely with the U.S. regarding the Iran situation, but I will refrain from commenting on every piece of information that is being reported,” Deputy Chief Cabinet Secretary Yasutoshi Nishimura said at a press conference July 17. He indicated the government’s intention to work toward relaxing tensions in the region, but avoided directly addressing U.S. explanations on the military coalition plan or how Japan would respond to it.

On June 12 and 13, Japanese Prime Minister Shinzo Abe visited Iran, where he met with various officials including Iran’s Supreme Leader Ayatollah Ali Khamenei. Abe was unable to fulfill his mission of being an intermediary between the U.S. and Iran, but has expressed his willingness to continue searching for a diplomatic solution.

Joining a military coalition organized by the U.S. has the potential to send Iran the message that Japan has joined an anti-Iran bloc. Tensions in Japan’s relationship with Iran would be inevitable, making Japan’s unique ability for diplomatic dialogue with Iran almost impossible. Because of this, Chief Cabinet Secretary Yoshihide Suga has only gone as far as to say that the Japanese government is “gathering necessary information and keeping a watchful eye on the state of affairs.” At a press conference July 16, Defense Minister Takeshi Iwaya clarified his intention to prioritize diplomatic efforts, and said, “At this point, we are not thinking about dispatching the SDF.”

Still, if Japan were to receive an official request from the U.S. to join its military coalition, it would have a difficult time turning it down. Many believe that Japan will have to cooperate in some form, with the Ministry of Defense beginning to review its legal framework in preparation for the dispatch of SDF troops. The Japanese government is planning to send someone from the Japanese Embassy in the U.S. to the information session that the U.S. government is giving about the military coalition on July 19. According to Kyodo News, U.S. National Security Adviser John Bolton — a hawk when it comes to Iran — is arranging a visit to Japan next week, during which the military coalition may be on the agenda.

Among Japan’s options are maritime security operations, which are public security duties that SDF troops take part in on the ocean under the Self-Defense Forces Act. It allows the SDF to escort ships for the protection of people’s lives and assets within the bounds of police action, and has been ordered three times in the past. However, SDF troops can only guard Japan-related vessels, such as those registered in Japan and those carrying shipments bound for Japan. The use of weapons that could be damaging to human life is limited to cases of legitimate self-defense and emergency evacuations, making it difficult to act in collaboration with a military coalition.

Joining a military coalition brings up the issue of whether Japan would be abiding by war-renouncing Article 9 of the Constitution. The Japanese government interprets the article to mean that SDF troops dispatched to other countries’ land, waters and airspace are prohibited from using force. Force applies when the other party is “a country or an organization equivalent to a country.” In the incident in June in which a tanker operated by a Japanese company was attacked near the Strait of Hormuz, the U.S. government has made the claim that the attack was carried out by the Islamic Revolutionary Guard Corps. If the SDF were to carry out maritime security operations in the waters there, it could possibly come upon a situation in which it must deal with “a country or an organization equivalent to a country.”

Is it even legally possible for Japan to join a military coalition? At the July 16 press conference, Defense Minister Iwaya said he would make decisions based on specific and concrete circumstances. A senior Defense Ministry official also said that “maritime security operations do not exclude countries as its target.” Joining any sort of military coalition, however, is undoubtedly bound to raise questions about compliance with the Constitution.

There is also the case of anti-piracy activities taken by the Japan Maritime Self-Defense Force’s escort vessels and patrol aircraft in the Gulf of Aden off the coast of Somalia. Because the SDF can protect ships belonging to other countries, with the exception of military and government vessels, it may appear to be the same as being a part of a military coalition as envisioned by the U.S. They are not the equivalent, however, since the SDF in this case targets pirates only.

With the passage of security-related legislation in 2015, it became possible for Japan to assist in “logistics,” such as providing supplies to the U.S. military and other countries’ forces in situations where Japan’s peace and safety are heavily impacted. However, a senior Defense Ministry official says that the protection of Japan’s own ships, which Trump is seeking, is not permitted under this legal framework. Neither is it easy to certify a situation in which Japan’s very existence is at stake, in which the limited exercise of collective self-defense would be permitted.

A special measures law could be passed to allow Japan to join a military coalition. That is how the Ground SDF was dispatched to Iraq. But for a law to be drafted, deliberated and passed takes time.

“Japan is in the midst of a House of Councillors election, and is in no state to make a political decision,” points out a senior SDF official. It is believed the Japanese government will wait until the details of the U.S. plan become clear to enter into full-fledged deliberations.

(Japanese original by Naritake Machida, City News Department and Yoshitaka Koyama, Political News Department) (JMH translated and added the chart that appeared on page 3 of the July 18, 2019, edition of the Mainichi Shimbun.)