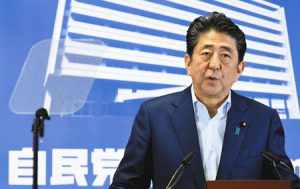 All national papers reported on Prime Minister Abe’s press conference on Monday following the ruling coalition’s victory in the Upper House election a day earlier, highlighting his strong pitch for Diet discussions on constitutional amendment even though the political forces in favor of revision lost their two-thirds majority in the chamber. While noting that amending the nation’s supreme law was one of the focal points of his campaign, the prime minister insisted that the ruling coalition’s victory showed that he was given a strong mandate to pursue his signature policy.

“The voters’ verdict was that the parliament should at least hold discussions,” said the prime minister. He went on to explain, however, that he will not be obstinate in pursuing the LDP’s draft revision that includes a provision to make the existence of the SDF explicit. “I think our proposal is best, but I will not insist on it. I will engage in discussions in a flexible manner.” Abe reportedly suggested that he will try to elicit support for parliamentary discussions from like-minded politicians in the opposition camp.

According to Asahi, the LDP’s junior ruling partner Komeito and some opposition parties reacted strongly to Abe’s call for debate on constitutional amendment. Komeito Chief Representative Yamaguchi took issue with Abe’s interpretation of the election results during a TV appearance last night by saying: “The prime minister was exaggerating when he said the outcome was evidence of the voters’ desire for debate on constitutional revision. I’m not so sure about the need to amend it at this stage.” Constitutional Democratic Party of Japan leader Edano, whose party won big in Sunday’s race, underscored yesterday that it is not necessary to conduct parliamentary discussion on the matter by telling the press: “The popular will was made clear. The political forces against constitutional revision now occupy more than one-third of the seats in the House of Councilors.” While other opposition parties are similarly opposed to Abe’s desire to promote discussions on amending the supreme law, DPFP leader Tamaki was reportedly accommodating in responding to the premier’s calls. “I sensed on the campaign trail that the voters wanted parliamentary debate,” he said. “The Diet must begin discussions.”