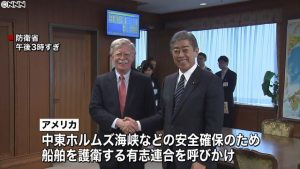 All national dailies reported on visiting National Security Advisor Bolton’s meetings with Foreign Minister Kono and Defense Minister Iwaya yesterday, speculating that they exchanged views on the proposed launch of a coalition of the willing designed to safeguard critical waterways in the Middle East. According to a MOFA briefing, the U.S. official and Kono reportedly confirmed close coordination between the U.S., Japan, and South Korea to denuclearize North Korea. Kono also briefed Bolton on the status of Japan-ROK relations. While noting that President Trump has hinted at his readiness to mediate between Japan and South Korea, Mainichi quoted a MOFA source as saying: “[Bolton] took note of Japan’s position. He did not mention arbitration.” The top White House security strategist told the press after his session with Kono: “We talked about all the issues that confront us.”

According to Yomiuri, the defense minister and Bolton discussed “Operation Sentinel” but did not go into the details. At the beginning of the session, Bolton reportedly said: “We are now at a very critical moment for enhancing the bilateral alliance.” He told the press afterward:  “The minister and I discussed how to strengthen the alliance going forward in a variety of ways and I’m sure those discussions will continue over next days and weeks. But I am very optimistic that the outcome will be very, very productive.”