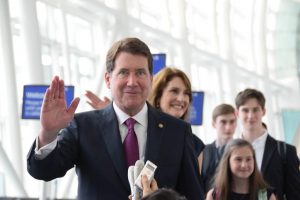 Asahi, Sankei, and Nikkei reported that Ambassador Hagerty left Japan on Monday. The Ambassador reportedly told the press upon departure at Haneda Airport that he will “begin a new life.” Asked the reason for his resignation, he reportedly only said: “Our time has come.” The Ambassador also reportedly said: “The fact that the Japanese people hosted President Trump as the first state guest in the Reiwa era was the greatest honor…. “Our biggest regret is that we will not be here to see the Olympics come together.” Nikkei took up the Ambassador’s farewell video, quoting him as saying: “Our two nations face significant challenges in the 21st century, but we will continue to confront them, united and with purpose and resolve.” NHK, Fuji TV, and TBS aired brief reports on the Ambassador’s departure in their news programs on Monday evening or Tuesday morning.