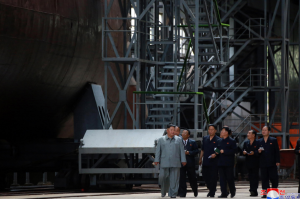 NHK and all commercial networks reported that North Korea’s state-run Korean Central News Agency (KCNA) reported on Tuesday morning that Kim Jong Un had inspected a newly built submarine, saying that it will be deployed for operations in the Sea of Japan. According to KCNA, Kim stressed the need to increase his nation’s defense capability by developing naval assets. NHK said that 38 North, a U.S. group monitoring North Korea, released in June its analysis of North Korea’s development of a submarine capable of carrying SLBMs at a navy shipyard in Sinpo, saying the United States is concerned about Pyongyang’s development of a new type submarine. The network said that although it is unknown whether the submarine inspected by Kim is the type Washington is concerned about, the DPRK apparently wanted to demonstrate its steady development of military technology ahead of the possible resumption of denuclearization talks with the United States.