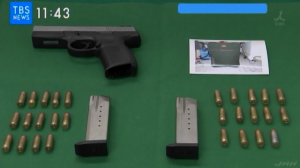 TBS reported that a 43-year-old American citizen was arrested at Narita Airport for allegedly carrying a handgun and 14 live bullets in his suitcase when he tried to board an airplane bound for Okinawa after arriving at Narita on Monday. The network said the suspect told the police that he came to Japan to work as a firefighter at a base in Okinawa. The suspect has reportedly denied the allegation by saying that although he owns the gun, he did not put it in his suitcase.