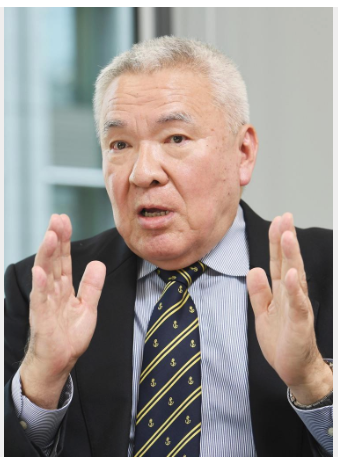 Former Maritime Self-Defense Force fleet commander Yoji Koda shared his thoughts about the U.S.’s plan to form a coalition of the willing to protect ships near the Strait of Hormuz off the coast of Iran. The former MSDF Vice Admiral said Japan should send MSDF vessels to protect ships related to Japan through maritime patrol operations based on the Self-Defense Forces Law. He also mentioned a possibility that a destroyer and P-3C patrol aircraft currently engaging in antipiracy operations in East Africa will be diverted to the operation to protect ships in the Strait of Hormuz.

Question: How is the coalition designed?

Yoji Koda: The coalition is designed to secure safety and maintain order for maritime traffic. And it aims to constantly watch for attacks on ships near the strait because attackers try to exploit lightly guarded time zones and waters.

Q: How exactly will the collation be operated?

The U.S. military will not take command of the coalition. Each country will take charge and escort its own ships. So the coalition will be based on individual operations, not combined operations.

Q: What options does Japan have?

Q: What is the legal basis for sending the SDF?

Koda: Maritime policing activities stipulated in the SDF law and issued to protect human lives and assets and maintain order on the sea exist to deal with the situation we are facing now. The SDF can also fire shots to cause injury (for legitimate self-defense or for emergency escape). There is no problem in sending the SDF overseas to protect Japanese vessels as part of policing activities. The SDF will not be involved in the invasion of a foreign country. So constitutional limitations and the right of collective defense are irrelevant.

Q: The MSDF won’t be able to afford to send vessels because they are patrolling the waters around Japan. Do you think the MSDF can send a destroyer?

Koda: I know it’s difficult, but if the MSDF can’t afford to send one, it can order to the destroyer based in the east African nation of Djibouti and engaging in anti-piracy operations in the Gulf of Aden off the coast of Somalia to divert to patrol around the Strait of Hormuz. If P-3C patrol aircraft can be also diverted to the strait, it would be very effective in allowing Japan to be able to monitor a wider sea area.

Koda: We’re going to protect our own ships, not to wage a war against Iran. Iran denies attacking a Japanese tanker, but the tanker was actually damaged. We can define our activities as those to deal with an unknown threat.