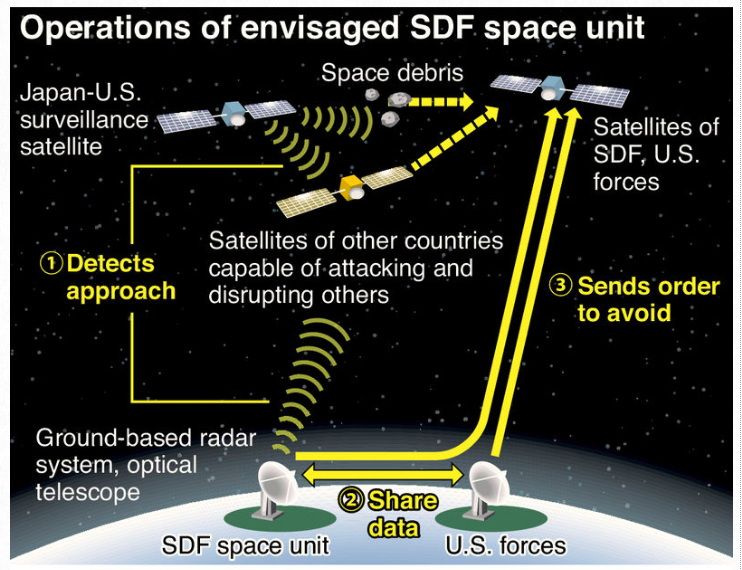 The government is making final arrangements to create a space unit in the Self-Defense Forces — the first SDF unit of this kind — in fiscal 2020, according to several government sources.

The unit will be staffed with about 70 personnel, and is expected to be deployed to the Air Self-Defense Force’s Fuchu base in Fuchu, Tokyo. The envisioned creation of a space unit is part of efforts that the SDF has been accelerating to respond to moves by the United States, China and Russia to increasingly use space for military purposes.

Currently, the government is developing a ground-based space surveillance system using high-performance radar and an optical telescope, and expects to begin operations in fiscal 2023.

The government initially planned to create an SDF space unit in fiscal 2022 prior to the start of the surveillance system, but it has decided to move up the schedule for the launch of the unit.

According to the sources, the envisaged space unit will operate the surveillance system, with its main missions including monitoring space debris, as well as satellites of other countries for possible attacks against other satellites and moves to disrupt their operations. Since the SDF does not have experience in such missions, the government plans to initially dispatch SDF personnel to U.S. forces and the Japan Aerospace Exploration Agency for training after the unit is launched.

The government will have the space unit participate in joint exercises with the United States and other countries’ forces so it can perform actual operations by the time the surveillance system is in full operation in fiscal 2023.

Communication satellites and positioning satellites to obtain accurate location data play a crucial role in today’s military activities. China and Russia have been developing weapons such as satellites that can attack satellites of hostile countries and disrupt their operations.

In 2007, China conducted a test to destroy a satellite using a missile, which created a huge amount of debris in outer space. There are concerns that this debris will collide with satellites of Japan and other countries, thus paralyzing their functions for communications and data collection.

In the new National Defense Program Guidelines, adopted in December, the government stipulates that the SDF will “build a structure to conduct persistent ground- and space-based space situation monitoring.” The United States plans to establish a space command by 2020, and the SDF will create a similar unit around the same time to beef up its capabilities in space in cooperation with U.S. forces.

During an April meeting of the Japan-U.S. Security Consultative Committee, also known as two-plus-two security talks, the two countries agreed that Japan’s quasi-zenith satellite system, which is scheduled to be launched in 2023, will contain space monitoring sensors provided by the U.S. Defense Department. The two governments are considering having U.S. forces and the SDF share space data the system will collect, thus aiming to enhance deterrence through their collaboration.

The government will also consider more seriously launching its own satellite equipped with space surveillance sensors.