TOKYO — Japan marked the 74th anniversary of its surrender in World War II on Thursday, with Emperor Naruhito mentioning “deep remorse” over the country’s past actions in his first appearance as emperor at an annual ceremony to mourn the war dead. 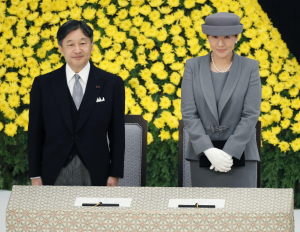 The 59-year-old, who ascended the throne in May, repeated the expression used by his father, former Emperor Akihito, in recent years. He was born after the end of the war and, unlike his father, has never experienced war.

In his address, Emperor Naruhito said, “Looking back on the long period of postwar peace, reflecting on our past and bearing in mind the feelings of deep remorse, I earnestly hope that the ravages of war will never be repeated.”

The 85-year-old former emperor, who abdicated in late April, used the words “deep remorse” in his message every year since 2015, the 70th anniversary of Japan’s surrender.

Prime Minister Shinzo Abe vowed not to repeat the tragedy of the war at the event, saying Japan “deeply recalls the lessons of history,” but did not mention the country’s past aggressions against its Asian neighbors as similar to years past since taking office in 2012.

“Over 3 million of our countrymen’s lives were lost during the war,” Abe said. “We will never forget that the peace and prosperity we are enjoying now are built on the ultimate sacrifices of the war dead.”

A moment of silence was observed by about 5,000 people gathered at Nippon Budokan at noon for the roughly 2.3 million military personnel and 800,000 civilians who perished in the war, including those killed in the U.S. atomic bombings of Hiroshima and Nagasaki, air raids, and the fighting on Okinawa.

Nearly 80 percent of their relatives in attendance were in their 70s or above, and the oldest person was 97-year-old Haru Uchida from Hachioji in Tokyo, while the youngest was four.

As the generation that experienced war dies out, no parents of the war dead have attended the ceremony since 2011, and only five wives were scheduled to do so this year compared to the 777 two decades ago.

Teenagers paid floral tributes in the ceremony to help ensure the impact, scale and horror of the war are remembered by the younger generation.

“Some children orphaned during the war are now more than 2 and half times older than the age reached by their deceased fathers, but our venerations and yearning for them never changes,” 77-year-old Kokichi Morimoto from Yokohama, who lost his father in New Guinea, said representing the bereaved families.

“We, bereaved families, strongly hope that the remains of those departed that are left in the vast war area will return home as soon as possible,” Morimoto said.

Many bereaved, including 79-year-old Hiroko Takesada from Kobe, visited Chidorigafuchi National Cemetery in Tokyo’s Chiyoda Ward where the remains of some 370,000 bodies of unidentified soldiers and citizens are interred.

Takesada was brought up by her grandparents who lost three of their nine children to the war, including her father, who died in June 1945 in the Philippines.

“I couldn’t talk about the war in my grandparents’ house,” said Takesada. “It’s a feeling beyond desolation. I can only pray for peace to continue.”

Tatsumi Suzuki, a 74-year-old from Saitama Prefecture, lost his father to starvation when he was detained in the Soviet Union after the war.

“After 74 years the tragedy of war is beginning to be forgotten,” said Tatsumi, as he expressed concern about recent unstable global developments. “There’s nothing good about the use of violence in solving issues.”

From early morning a queue of visitors waited outside Yasukuni Shrine in Tokyo, which honors convicted war criminals such as wartime Prime Minister Gen. Hideki Tojo, along with over 2.4 million war dead.

“Yasukuni is a place where I can feel my father close,” said 76-year-old Hirofumi Maruyama from Nagano Prefecture, whose father died at the age of 28 in the Philippines. His remains have yet to be returned.

Yohei Kuge, 39, from Saitama Prefecture, visits the Shinto shrine every year on this day with his wife and two children to commemorate his uncle, who died in the war. “I’d like to teach my children that the peaceful Japan we have now is thanks to those who made noble sacrifices.”