By Muneo Suzuki, an Upper House member from the Japan Innovation Party 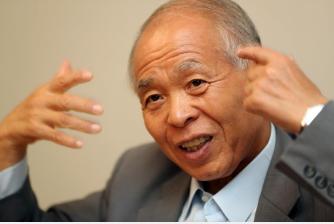 I ran in the Upper House election held in July on the Japan Innovation Party (Nippon Ishin) ticket and returned to national politics for the first time in nine years. Ishin’s political motto is to carry out “painful reforms.” This is the same vision as that of the New Party Daichi, which I launched in 2005. Daichi had long advocated for cuts in the number of Diet members and their remuneration, so I felt right at home with Ishin.

The most important thing is that Ishin is a sound conservative party. It is no different from the Liberal Democratic Party when it comes to national basic policies, which include foreign affairs, security, education, and public safety. Ishin was formed through alignments and realignments. In this process, only self-centered people left. I personally feel that these people should be more appreciative. The party has many talented junior members. I want to share my experiences and expertise with them and hope they can make use of these.

I have been away from the Diet for some time, but I am now hoping to support Prime Minister Shinzo Abe in resolving the Northern Territories issue, a project that I have made my life’s work.

On Aug. 1, I visited Prime Minister Abe to convey my election to office. He said to me in a resolute fashion, “I will take the Japan-Russia matter into my own hands.” I instantly felt that he was determined to settle the Northern Territories issue, which has been left unaddressed for more than 70 years, and sign a peace treaty.

I suddenly recalled a conversation I had with Prime Minister Abe in December 2015. At an event celebrating the 130th anniversary of the establishment of the cabinet system, which I also attended, Prime Minister Abe said to me, “Come and see me at the Prime Minister’s Office [Kantei] to talk when you have time.” On Dec. 28, I visited him.

Prime Minister Abe discussed how the government has handled Japan-Russia negotiations and how it plans to proceed with them in the future. He talked about how he wants to move the negotiations forward by factoring in the history [of the Northern Territories] in the Soviet Union era. I totally agreed with his vision. After sharing his thoughts, he clearly said to me “I will focus on Russia starting from next year.”

Japan did in fact enter full-fledged negotiations with Russia the following year. In May 2016, Prime Minister Abe and Russian President Vladimir Putin agreed to promote negotiations based on a “new approach” and Abe proposed an eight-point economic cooperation program. Now many projects are underway involving the private sector in healthcare, energy, advanced technology, and other fields.

In December of that year, another summit was held in Nagato, Abe’s hometown in Yamaguchi Prefecture. At that time, Japan and Russia agreed to start talks on joint economic activities to be conducted on the four Northern islands. This has to do with Russia’s sovereignty over the four islands, which it effectively took control of, but in June this year, Prime Minister Abe and President Putin agreed to carry out pilot projects in tourism and waste disposal as early as this autumn. I think this is a major achievement.

When Prime Minister Abe and President Putin met in Singapore in November 2018, they agreed to accelerate negotiations on concluding a peace treaty based on the Japan-Soviet joint declaration of 1956. There have been media reports saying that the talks have stalled, but that is not true.

Russia was keeping an eye on Japan’s Upper House election in July to ensure that Abe’s solid foundation would not be shaken. Now that Russia has learned that the ruling camp was successful and the foundation of the Abe government remains solid, it will likely become more committed to negotiations.

Japan and Russia are making arrangements to hold a summit on the sidelines of the East Economic Forum, which will start on Sept. 4 in Vladivostok in the Russian Far East. What message will Prime Minister Abe convey ? And how will President Putin respond? That will become the focus of greater attention.

There are about two years left before Prime Minister Abe’s term as the president of the LDP expires. Some people say there is not much time left, but that is not true. Once he charts a new path at the summit in Vladivostok, negotiations will gain speed.

The ruling and opposition camps should be on the same page when it comes to national interests. I have absolute trust in Prime Minister Abe’s foreign policy with Russia and I want him to make full use of all of my personal connections, knowledge, and experience.