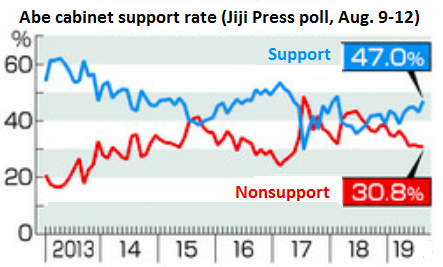 The disapproval rate edged down 0.2 point to 30.8 pct, according to the survey conducted for four days through Monday.

The readings reflected apparent public support for Abe’s recent decisions to tighten controls on exports to South Korea and not to appeal a landmark court ruling that ordered his government to pay damages to relatives of former leprosy patients, sources familiar with the situation said.

On Abe’s tenure as president of the ruling Liberal Democratic Party, 49.5 pct of respondents opposed a party rule revision aimed at keeping him in the post beyond the expiration of his current term in September 2021.

By contrast, 27.7 pct supported such a revision, while 22.8 pct did not take either position.

Among supporters of opposition parties, including the Constitutional Democratic Party of Japan, the Democratic Party for the People and the Japanese Communist Party, the proportion of respondents who opposed such a revision reached 70 to 80 pct.

On reasons for supporting the Abe cabinet, while multiple answers allowed, 22.9 pct said there is no other suitable person for prime minister, 14.0 pct said Abe has leadership skills and 9.1 pct said they trust him.

Support stood at 4.1 pct for Komeito, the coalition partner of the LDP, 2.2 pct for Nippon Ishin no Kai (Japan Innovation Party), 2.1 pct for the JCP and 0.6 pct for the DPFP.

The support rate was 1.0 pct for Reiwa Shinsengumi and 0.4 pct for NHK kara Kokumin wo Mamoru To (party to protect the people from Japan Broadcasting Corp., or NHK). The two groups won legal status as political parties as a result of last month’s election for the House of Councillors, the upper chamber of parliament.

The proportion of respondents with support for no specific political party accounted for 53.4 pct of the total, down 4.9 points.

The survey was conducted by interviews with 2,000 people aged 18 or older across the country, with valid responses from 62.4 pct.