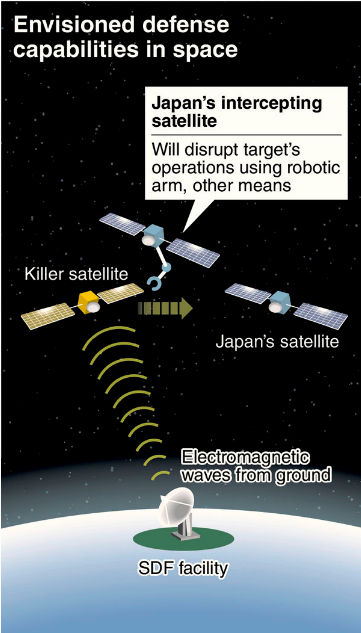 The government is considering launching a satellite to intercept foreign countries’ military satellites in the event of an emergency, as part of efforts to strengthen deterrence amid a rapidly increasing military threat in outer space, as seen in the development by China and Russia of satellites that can attack others, according to several government sources.

The government plans to make a formal decision on the introduction of such an intercepting satellite by the end of the next fiscal year so it can be launched in the mid-2020s, the sources said.

The Self-Defense Forces currently use information-gathering, communication and positioning satellites, and rely heavily on outer space, however, “We don’t have any defense capability for the satellites,” a Defense Ministry senior official said.

When it comes to so-called killer satellites that can attack other nations’ satellites, China is believed to have developed one equipped with a robotic arm with an aim to put it into practical use. The government has concluded that it is necessary for Japan to establish its defense capabilities in space to deter attacks from other countries.

The government is considering introducing a type of satellite that can disable the operations of other countries’ military satellites. This fiscal year, the ministry will start conducting research on means to disable satellites, through the use of technology as robotics arms, electromagnetic waves and cyber-attack. Based on the findings of the research and other factors, the government will decide by the end of fiscal 2020 on the introduction of an intercepting satellite.

The Japan Aerospace Exploration Agency has developed robotic-arm tech for satellites, among other technology. “Japan should take full advantage of its own technological capabilities,” a government source said.

Meanwhile, in the event of an emergency, the government also wants to develop systems to intercept from the ground foreign satellites or airborne warning and control system (AWACS) planes, using electromagnetic waves. The ministry is considering a two-phase plan, with an aim to develop a jamming system targeting AWACS planes in the mid-2020s before going on to the development of such a system targeting foreign satellites.

The ground-based jamming systems are expected to be deployed to Ground Self-Defense Force facilities, with the one for AWACS planes set to be installed on vehicles and the one for satellites at ground facilities. The ministry will have to discuss with local governments the prospective deployment of these systems.

In 1969, the Diet adopted a resolution that stipulates space development should be limited to peaceful purposes. Amid increasing military use by other countries, the Aerospace Basic Law was enacted in 2008, calling for promoting the development and use of space to contribute to national security, based on Japan’s exclusively defense-oriented principle.

The government has concluded that the envisioned intercepting satellite is within the scope of this principle, and is considering allowing a space unit — which will be established in the SDF as early as fiscal 2020 — to handle its operations.