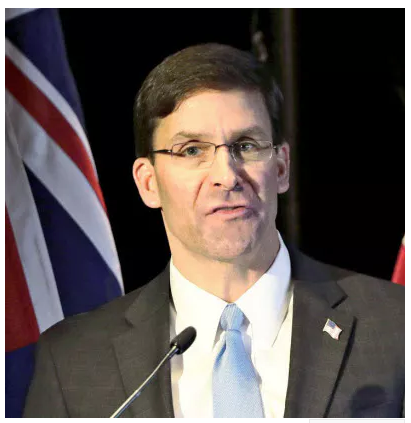 WASHINGTON — Mark Esper became the second Secretary of Defense in the U.S. administration under President Donald Trump in late July. The post had been vacant since James Mattis resigned in December 2018 and the former Acting Secretary of Defense refused  promotion to the post. Esper’s appointment came as a sudden promotion from U.S. Army Secretary. Soon after his appointment, he traveled to South Korea and Japan in August. He talked about the importance of trilateral cooperation between Japan, the U.S., and South Korea in dealing with North Korea and China. He also worked to put an end to the worsening of relations between Tokyo and Seoul.

Esper has a diverse background. After graduating from the United States Military Academy, he joined the Army’s airborne division in the 1990s and served in the Gulf War. He has also worked at the Congress, a conservative think tank, and the U.S. Department of Defense. At the major defense firm Raytheon, he was responsible for negotiations with the government. During the confirmation hearing held by the Congress, the opposition Democrats claimed that his connection with Raytheon would lead to a collusive relationship between the defense industry and the Department of Defense.

Esper is a staunch supporter of the government’s tougher approach to China. In an interview with an American media outlet, he said, “[The U.S.] was slow to recognize that it would engage in a strategic competition with China.” He has also served as a member of the “U.S.-China Economic and Security Review Commission,” an advisory body to the Congress that exerts an influence on the U.S.’s policy toward China.

Esper is likely to support President Trump’s hardline stance on China. But he will also take on the large role of giving candid advice to President Trump, who often relies on his own intuition in deciding security policy.