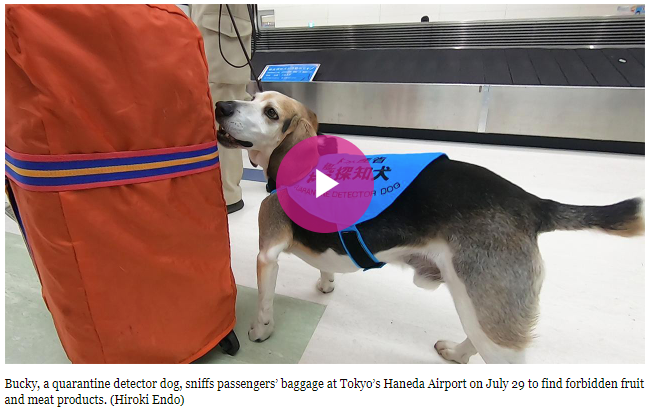 Sniffer dogs, typically used for drug detection at airports, are at the forefront of efforts to prevent African swine fever and other infectious diseases from entering Japan.

The Animal Quarantine Service, an arm of the Ministry of Agriculture, Forestry and Fisheries, plans to deploy 20 more quarantine detector dogs at airports and other points of entry into Japan this fiscal year.

Bucky, an 11-year-old beagle, was on duty sniffing the crowded carousel for arriving luggage at Tokyo’s Haneda Airport on July 29.

It was particularly busy as the summer vacation season is now in full swing.

Bucky suddenly stopped, and quietly assumed a “sitting” pose behind a male passenger, an indication that he had a forbidden item.

A similar technique is used by sniffer dogs at airports and ports to detect illegal drugs.

A quarantine officer asked the man to open his backpack. It contained a home-made ham sandwich, proving Bucky’s hunch was right.

Japanese law prohibits arriving passengers from bringing in meat, sausages, bacon or any other meat products without a certificate of inspection specifically issued for entry into Japan by the following countries: the United States, Canada, Australia and New Zealand.

According to the preliminary figures released by the ministry, 39,835 prohibited meat products were detected in hand-carried baggage during the period from January to May this year.

Of this figure, 14,459 items, or 36 percent, were detected as a result of quarantine detector dogs.

As global concern mounts about outbreaks of fatal African swine fever, Japan is stepping up its efforts to prevent it and other infectious diseases from entering the country. 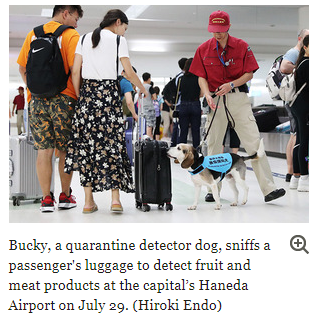