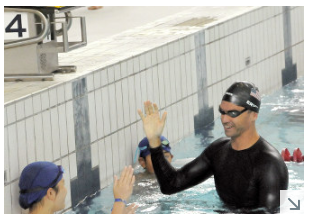 Story and photo by Tadashi Murakami

American swimmer Anthony Ervin, 38, who won gold medals in men’s swimming at the Olympic Games in Sydney in 2000 and in Rio de Janeiro in 2016, held a clinic for some 100 local Japanese elementary, junior high, and senior high school students in Tokyo’s Setagaya Ward on Aug. 19.

The clinic was held in connection with the ward’s registration as the official host town for the U.S. in the 2020 Tokyo Olympics. Ervin demonstrated swimming strokes and kicks. At the end of the clinic, he joined the students in a relay race.

Ervin, who entered the spotlight as the first American Olympic swimmer of African descent, temporarily retired from swimming because he was tired of having the image of pathbreaker thrust upon him. He gave the students advice, saying, “You’ll face hardships and challenges, but I want you to regard them as training.”