The fiscal 2020 national budget is likely to include funding to develop a successor to the Air Self-Defense Force’s F-2 fighter, multiple government sources said. 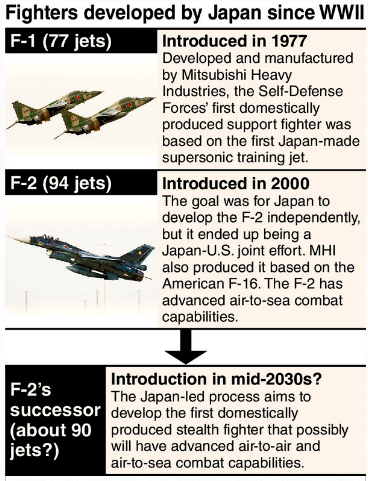 The goal is for Japan to lead the development process, which at present is estimated to cost at least ¥1.5 trillion ($14 billion). The government wants the new fighter to be ready by the mid-2030s, when phaseout of the F-2 is scheduled to begin.

With deterring China’s increasing aggressiveness at sea a major concern, the leading proposal within the government is for the successor jet to be the first domestically produced stealth fighter and be equipped with advanced air combat capabilities.

Another proposal is to equip the fighter with long-range cruise missiles and robust anti-ship capabilities in addition to the advanced air combat capabilities.

Plans are proceeding based on an assumption that the ASDF would receive about 90 of the new fighters, similar to its current F-2 force.

The development costs are expected to be listed as a “required item” in the budgetary request. Yen amounts are not disclosed for such items.

The fighter’s concept is expected to be finalized and its cost calculated before work on the next fiscal year’s budget begins at the end of this year.

The government believes that because of factors such as the high cost and the need for systems that can share information with the U.S. military, it will be difficult for the fighter to be wholly domestically produced. Some foreign technology is expected to be included.

Regarding the F-2’s successor, the Medium Term Defense Program released in December states that the government will “launch a Japan-led development project at an early timing with the possibility of international collaboration in sight.”

Yet even if development ends up being a joint effort, the goal is for the fuselage and major systems to be made in Japan so the government can modify them at will.

Regarding joint development, one proposal from Lockheed Martin Corp. of the United States is to equip the U.S. Air Force’s F-22 fighter with electrical components from the F-35 fighter. However, many in the Japanese government are against this plan as each plane would cost more than ¥20 billion. A senior Defense Ministry official also added, “There’s no guarantee they would fully disclose” the systems’ designs.

Meanwhile, the British government is aiming to develop a next-generation fighter it is calling Tempest. Because it will be developed at the same time as the F-2’s successor, the Japanese and British defense authorities are discussing the possibility of cooperating on development.

The government’s concept for the ASDF’s fighter lineup in the mid-2030s is to have 147 F-35s, the state-of-the-art stealth fighter made by Lockheed Martin capable of executing various missions, including air-to-air, air-to-sea and air-to-ground combat; about 100 modernized F-15s, which are made by Boeing Co. of the United States and have advanced air-to-air capabilities; and the F-2 successor fighters.