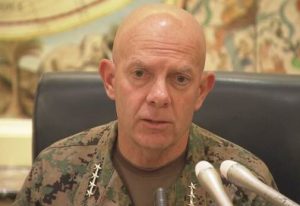 NHK reported yesterday on Wednesday’s press conference held by Marine Commandant Berger. He reportedly stressed “the importance of deepening trilateral cooperation among the U.S., Japan, and the ROK to deal with the long-term threat posed by China and the short-term threat posed by North Korea” even amid frigid relations between Japan and South Korea. “Since the three countries share the same perception of these threats,” he added, “they need to maintain the highest level of training to be able to respond to them.” With regard to the Japan-ROK GSOMIA, he reportedly said it is important that the two countries share military intelligence. Commenting on China’s activities in the South China Sea and elsewhere, Berger pointed out that two-thirds of the Marines are stationed in the Indo-Pacific and that troops are generally deployed in critical locations, indicating that the U.S. intends to increase its involvement in the region to contend with China.

This morning’s Asahi also reported on the press conference. The paper wrote that concerning the Izumo-class destroyers that will be converted to aircraft carriers, General Berger reportedly said that operations can be more flexible if there are ships that both U.S. and Japanese F-35s can land on and that the ships will be useful not only for landing and taking off, but also for refueling and preparing weapons.