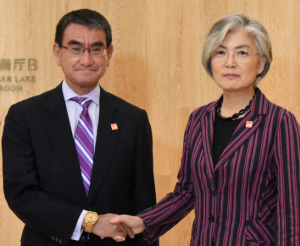 All national dailies featured front-page reports on a meeting held between Foreign Minister Kono and his South Korean counterpart Kang on Wednesday in Beijing, saying that the two officials apparently failed to narrow differences over the issues of former Korean requisitioned workers and Japan’s tightened controls on exports to South Korea. The papers wrote that at their 40-minute meeting, Kono renewed Japan’s request for South Korea to rectify its violation of international law in dealing with the requisitioned worker issue, while Kang called on Tokyo to withdraw its tighter export controls. Yomiuri wrote that although attention was focused on whether South Korea would shift its stance on the requisitioned worker issue at the foreign ministerial because ROK President Moon had refrained from harshly criticizing Japan in his remarks on Aug. 15, Kang presented no specific steps toward resolving the dispute. However, the papers pointed out that the two officials agreed that Japanese and South Korean diplomats will continue communicating with each other to resolve the issue.

Concerning South Korea’s earlier suggestion that it might withdraw from the GSOMIA with Japan, Kono told reporters after the meeting that he discussed the issue with Kang but declined to provide further details. Kang reportedly told Kono that a decision on whether to extend the intelligence-sharing pact with Japan is “under review.”

Kono also expressed Japan’s concern over anti-Japanese moves in South Korea, including boycotting Japanese products and cancelling people-to-people exchanges, and asked Kang to ensure the safety of Japanese nationals in the country.

In related stories, all national dailies wrote that the Japan Tourism Agency said on Wednesday that the number of South Korean visitors to Japan dropped to its lowest level in almost a year in July. While the estimated total number of foreign visitors in July rose by 5.6% from a year earlier to 2,991,200, an all-time high for any month, the number of South Korean tourists fell by 7.6% to 561,700, ranking second after China at 1,050,500, up 19.5%.

The papers also wrote that during a trilateral meeting held between the Japanese, Chinese, and South Korean foreign ministers ahead of the Japan-ROK foreign ministerial talks, Chinese Foreign Minister Wang reportedly urged his Japanese and ROK counterparts to seek to resolve their differences in a constructive manner. According to the papers, the ROK minister stated at the trilateral meeting that the “arbitrary” export controls should be terminated, but Kono responded by saying the bilateral dispute should not be discussed in a trilateral session with China.