WASHINGTON — Japan and the United States are getting closer to the “final stage” in their talks toward a bilateral trade deal, Japan’s top trade negotiator Toshimitsu Motegi said Wednesday in Washington. 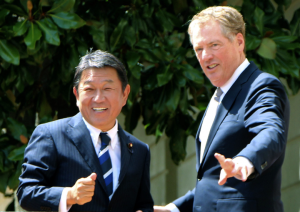 Japanese economic revitalization minister Motegi and U.S. Trade Representative Robert Lighthizer started the latest round of ministerial trade talks in the U.S. capital earlier in the day, and the negotiations are scheduled to last for at least two days.

With Tokyo and Washington hoping to reach a broad agreement by the end of September, the focus of the latest meeting is whether they can iron out differences in views over tariffs on key sectors such as beef and automobiles.

“As we are putting our national interests at stake, the negotiations are tough. But we have trust in each other, and we’ve been able to deepen our discussions,” Motegi told reporters following the first day of the talks that continued more than five hours.

He also said the two countries have “narrowed down the remaining agenda items” without elaborating, and that the negotiations are “gradually approaching the final stage.”

In a meeting in September last year, Trump and Japanese Prime Minister Shinzo Abe agreed the United States would not demand deeper farm tariff cuts than levels Japan has agreed to elsewhere, such as in the revised Trans-Pacific Partnership free trade pact, an 11-nation deal that entered into force the same year.

Under the revised TPP, formally known as the Comprehensive and Progressive Agreement for Trans-Pacific Partnership, Japan’s 38.5 percent tariff on beef imports will be lowered in stages to 9 percent over 16 years.

The latest ministerial meeting is being held just days ahead of the Group of Seven summit in France. Abe and Trump are likely to meet on the sidelines of the summit, with bilateral trade issues expected to be on the agenda.