Examining Abe diplomacy (Part 1): Intimacy between U.S. and Japan based on trust

One of the characteristics of Prime Minister Shinzo Abe’s diplomacy is that it is “top-to-top diplomacy.” The prime minister first builds a personal relationship with his counterparts and tries to resolve issues based on the relationship.

The relationship with U.S. President Donald Trump is a successful example. During the latest summit meeting held on the sidelines of G7 Leaders Summit in Biarritz, France, President Trump said, “As long as he [Prime Minister Abe] is prime minister and I am president, we are on the same page.” In this way, the president expressed his trust in the prime minister.

Leaders in other countries envy the relationship between President Trump and Prime Minister Abe.

“How will I be able to get along with President Trump?”

Chinese President Xi Jinping posed this question to Prime Minister Abe over dinner during the Japan-China summit held in Osaka on June 27, a source said. President Xi Jinping has racked his brain over the trade friction with the U.S. According to the source, the Chinese president entreated the prime minister to reveal the secret of getting along with President Trump.

However, there are changes arising in the relationship between Prime Minister Abe and President Trump.

“[Since North Korea] has behaved well, you can keep quiet, can’t you?”

According to a source, President Trump expressed his frustration toward Abe when the prime minister reiterated the importance of “complete, verifiable and irreversible dismantlement” of weapons of mass destruction during a summit meeting a while ago and advised him not to be too eager [for a summit meeting with North Korea].

The president also complained about Prime Minister Abe’s visit to Iran in mid-June, the source said.

Prime Minister Abe has built intimate relationships with other foreign leaders who are criticized for their highhanded political styles. The premier has met with Russian President Vladimir 26 times including meetings during the first Abe cabinet. In December 2016, the prime minister welcomed the president to a landmark Japanese inn in his hometown of Nagato City, Yamaguchi Prefecture.

Prime Minister Abe has finally become able to not only discuss policies with President Xi but also engage in personal conversation over dinner following a long period of rocky relations.

Prime Minister Abe’s top-to-top diplomacy has been successful to a certain degree.

His diplomacy has functioned as a buffer against President Trump’s “America First” policy.

During the 2016 president campaign, Mr. Trump repeatedly said, “We will defeat Japan and China in trade,” and the “Japan-U.S. Security Treaty is unfair.” Compared with China, which is suffering from high tariffs raised by the U.S., Japan has avoided suffering actual damage from the U.S.

Some Japanese officials voice concern that in order to maintain the intimate relationship with the U.S., Japan has to accept a greater burden in bilateral trade and security, and the U.S. is easing pressure on North Korea over its short-range ballistic missile launches.

Some experts point out that Japan has made a de facto concession to Russia over negotiations for a peace treaty including the Northern Territories issue by shifting from the return of four islands to the return first of two  (Habomai and Shikotan). Also, Japan’s response was called into question when the country did not keep step with the U.S. and Europe in imposing sanction measures against Russia.

Top-to-top diplomacy makes the decision-making process opaque. Accountability to the Diet and the people are sometimes insufficient.

Prime Minister Abe’s has two years remaining in his term until September 2021. His long-term administration featuring top-to-top diplomacy is entering the final stage. 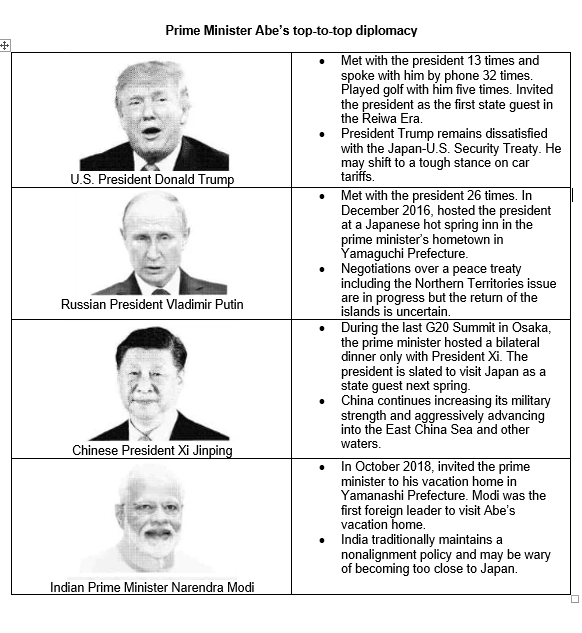