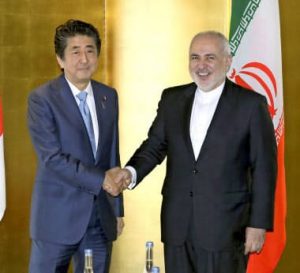 All national papers wrote that visiting Iranian Foreign Minister Zarif met with Prime Minister Abe in Yokohama yesterday and agreed to arrange for a summit between him and President Rouhani on the fringes of the UN General Assembly in New York in late September. While recalling that the Iranian leader voiced his resolve to deescalate tensions with the U.S. through dialogue when they met in Tehran in June, Abe said he would like to continue diplomatic efforts. Zarif reportedly stated in reply that Tehran welcomes Japan’s role in reducing tensions. The papers wrote that Abe apparently urged Tehran to comply with the Iran nuclear accord, while Zarif likely asked Japan not to join the U.S. initiative to launch a multinational coalition to protect critical waterways in the Middle East.

In a related piece, Mainichi highlighted remarks made by a MOFA source, who said Japan is coordinating closely with France to arrange dialogue between Tehran and Washington. Another MOFA source reportedly said: “The U.S. is now in a diplomatic mode. Japan should do all it can to capitalize on the momentum.”