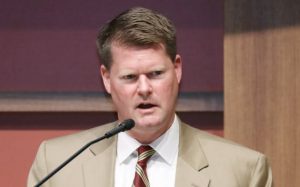 Nikkei front-paged a one-on-one interview with Assistant Secretary of Defense for Indo-Pacific Security Affairs Randall Schriver in Washington on Tuesday. He reportedly voiced hope that South Korea conduct a review of its decision to end defense intelligence sharing with Japan. He reportedly explained that contrary to South Korea’s assertion, the USG was not informed in advance of the decision to terminate the GSOMIA, saying that Washington believed the matter was still under deliberation within the ROK government. While noting that the U.S., Japan, and South Korea can still share military intelligence through the conduit of the U.S., he reportedly underscored that the process will be cumbersome and time-consuming. He stressed the importance of speedy reconciliation between the two key U.S. allies in East Asia by saying that the conflict between them benefits China, Russia, and North Korea. Commenting on North Korea’s repeated testing of short-range ballistic missiles, A/S Schriver reportedly noted that the provocations were staged not only for political purposes but also for upgrading missile technology. He also reportedly indicated that the USG is likely to ask Japan to increase its host nation support for the U.S. military.

In a separate analytical piece, Nikkei conjectured that A/S Schriver’s remarks reflected Washington’s strong concern that the escalating feud between Tokyo and Seoul could potentially undermine U.S.-led security arrangements in the region a time of looming security threats posed by North Korea, China, and Russia. The article said the Defense Department apparently takes a more critical view of North Korea’s missile provocations than does President Trump. As China and Russia are allegedly moving to deploy medium range-ballistic missiles, A/S Schiver reportedly said the U.S. may consider deploying such missiles in East Asia and did not rule out the possibility of Japan as a possible site.

According to Yomiuri, NHK, and Fuji-TV, A/S Schriver delivered a speech in Washington on Wednesday and urged South Korea to renew the GSOMIA and hold “meaningful discussions” with Japan. NHK broadcast a similar story this morning.

Yomiuri also said that an unnamed senior USG official reportedly indicated on Tuesday that Washington is currently calling for Seoul to reconsider its withdrawal from the GSOMIA, which he stressed remains effective through Nov. 22.

In a related development, Yomiuri and Asahi reported that the South Korean vice foreign minister summoned U.S. Ambassador Harris to the ministry yesterday to discuss bilateral relations and the escalating tensions with Japan. The minister reportedly urged the USG to refrain from expressing “disappointment” and “concern” over Seoul’s decision to discontinue exchanging military intelligence with Tokyo, arguing that the use of such language in the public sphere does not contribute to the enhancement of the bilateral alliance.