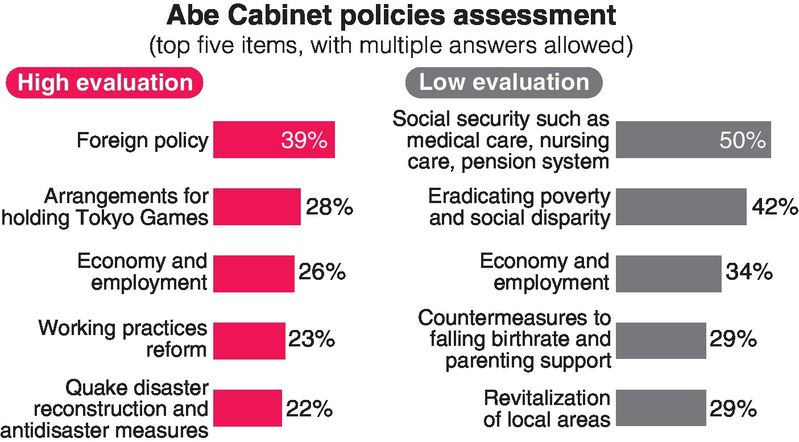 In a recent survey asking in what areas the Cabinet of Prime Minister Shinzo Abe performed well, 39 percent of respondents, the highest rate, answered “foreign policy.”

The rate of those who answered “arrangements for holding the Tokyo Olympic and Paralympic Games” stood at 28 percent, and “economy and employment” at 26 percent. Multiple answers were allowed.

The Yomiuri Shimbun and the Waseda University Institute for Advanced Social Sciences conducted the joint nationwide survey about people’s political awareness following the House of Councillors election, which was held on July 21.

Asked what they want more of from the government, with a choice between “stability” and “reform” in the political system, 60 percent selected stability — including those who said they “somewhat seek stability” — far surpassing the 38 percent who wanted political reform.

Asked which areas of policy they could not give high marks to, with multiple answers allowed, 50 percent — the highest rate — cited “social security such as medical care, nursing care and pension systems.” Forty-two percent chose the government’s effort to “eradicate poverty and social disparity,” followed by 34 percent who picked “economy and employment.”

The survey also asked respondents to assess the Abe Cabinet’s job performance in the past 6½ years on a scale of 0 to 10. The Cabinet received an average rating of 5.2, compared to 4.8 in the survey conducted in July-August 2017 and 5.0 in September-October 2018.

“Japanese people nowadays have lost the verve to compete internationally, but I think young people still have the energy to regain it,” said Waseda University President Aiji Tanaka, a specialist in political awareness.

The survey was conducted from July 22 to Aug. 26 by mailing questionnaires to 3,000 randomly selected eligible voters in 250 locations nationwide. Sixty-five percent, or 1,935 people, gave valid responses.