TOKYO — The Japanese public increasingly supports the government’s export controls against South Korea, the latest Nikkei-TV Tokyo survey shows, with a majority of respondents in no rush to improve bilateral ties if it means a compromise by Tokyo.

The weekend poll found that 67% of respondents backed Japan’s restrictions on semiconductor materials that took effect July 4, up 9 percentage points from the last poll at the end of July. Opposition to the export curbs remained roughly flat at 19%.

The trade curbs received support across political lines, favored by 78% of Japanese who support Prime Minister Shinzo Abe and 60% of those who do not. All age groups reported over 60% support as well.

The proportion of undecided respondents has dropped to 13% from 22% as the feud drags on. Japan removed South Korea from its “whitelist” of trusted trade partners in August, leading Seoul to scrap a military intelligence-sharing pact.

Just 21% of respondents said they would support a compromise to dispel tensions.

Two-thirds, or 67%, saw no need to mend fences swiftly if it required compromise by Japan. This opinion was voiced by 71% of Abe supporters and 63% of non-supporters.

Men tended to be harsher on South Korea than women. Seventy-eight percent of men favored the export curbs compared with 53% of women, and 74% of men said Japan should not hurry to warm bilateral ties compared with 58% of women.

Gender also appeared to factor into support for Abe. Approval for Japan’s cabinet jumped 9 points among men from the July poll to 66%, while remaining flat for women at 47%.

Regarding Abe’s push to amend Japan’s constitution, 77% thought the political parties should have a detailed debate in parliament, while 16% said that would be unnecessary.

When asked who should be the next prime minister, the LDP’s Shinjiro Koizumi was the most popular response, at 29% — 6 points higher than when the question was asked in May. Koizumi, the son of former Prime Minister Junichiro Koizumi, has been in the news recently over his marriage to popular news anchor Christel Takigawa.

Retaining Abe was the second most popular choice at 18%, 5 points lower than in May, followed by former LDP Secretary-General Shigeru Ishiba.

The poll was conducted from Friday to Sunday by telephone, receiving answers from 948 individuals for a response rate of 46.2%. (JMH added the infographics based on those that appeared on page 2 of the Sept. 2, 2019, edition of the Nikkei.)

[Polling methodology: The poll was conducted on Aug. 30–Sept. 1 [by Nikkei Research Inc. via random-digit dialing (RDD) to both landlines and mobile phones. It drew 948 responses from those 18 and older, for a 46.2% response rate]. Figures in parentheses denote the results of the previous poll conducted on July 26–28, and “—” indicates that no data is available. Figures are rounded off. In some cases, the total percentage may not add up to 100%. Regarding the cabinet support rate, a follow-up question was posed to respondents who answered “not sure” or “don’t know”: “Which is closer to your view?” Regarding political party support, a follow-up question was posed to pollees who responded “not sure,” “don’t know,” or “none of the above”: “If you had to say, which political party do you feel positively about?” The responses to the follow-up questions were added to the responses to the initial questions.] 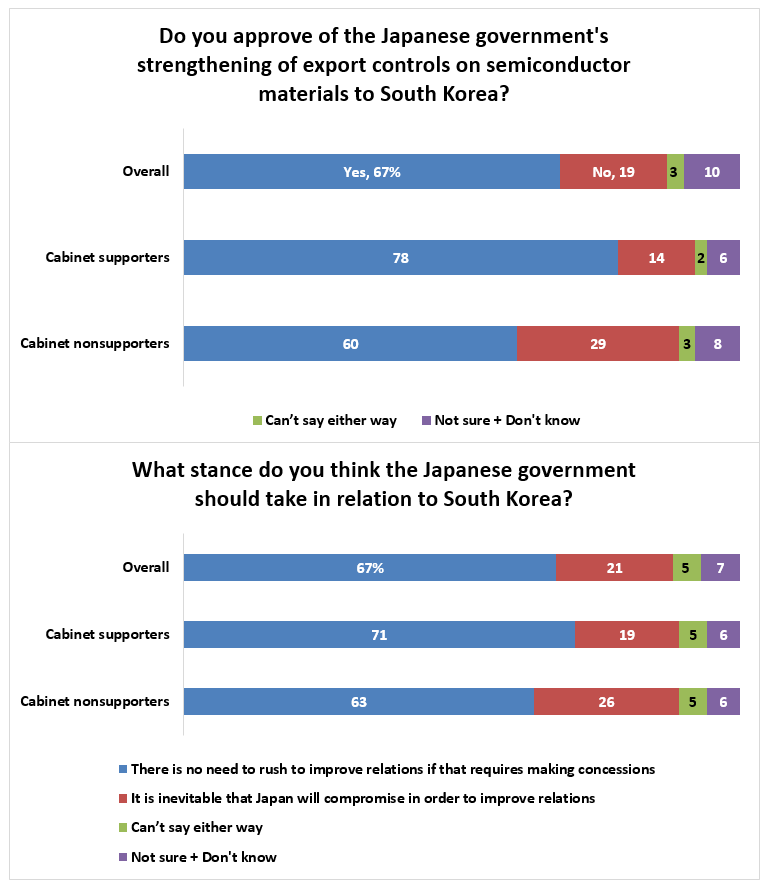