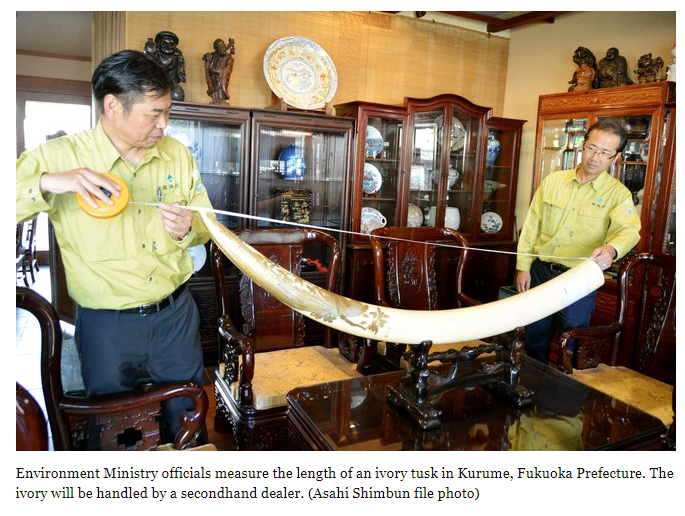 Despite a new international agreement on the ivory trade that gives some consideration to Japan’s position, the global trend is clearly toward tougher restrictions on the commercial trade of ivory, which is threatening Africa’s elephant population.

The Japanese government should make a wholesale review of its policy concerning the issue based on an accurate understanding of the situation.

Countries that are parties to the Convention on International Trade in Endangered Species of Wild Fauna and Flora (CITES), a multilateral treaty to protect endangered plants and animals, have discussed a proposal to immediately shut down domestic ivory markets submitted by nine African countries fighting ivory poaching.

After a week of heated debate on the proposal, the countries settled for a compromise that puts a heavy responsibility on nations with a domestic ivory market to report measures to prevent poaching and illegal trade.

While the Japanese government claims its argument has been accepted, there is no denying that the international community is growing more critical of ivory trading.

Tokyo clearly needs to take an overdue first step toward a complete ban on the commercial trade of ivory in Japan.

Under the CITES, also known as the Washington Convention, international trade in African elephant tusks and other ivory products has been prohibited, in principle, since 1990.

In the previous conference of the members of the convention, held in 2016, the countries moved beyond the prohibition on cross-border ivory trade and agreed to ban the sale of ivory within their own borders to help stem the rampant poaching of elephants and illegal ivory trade.

In response to the move, China, which was the largest market, ended its domestic production and trade of ivory at the end of 2017.

Singapore and Hong Kong have decided to follow suit, accelerating the trend toward closing the internal trade of ivory.

Japan still allows trade in ivory it imported before 1989 or accepted exceptional exports from Southern African nations after that.

The Japanese government has asserted that the nation’s domestic market is strictly regulated. It tightened the regulatory control on domestic ivory trade after the previous CITES conference by requiring ivory dealers to register with the authority, switching from the simple requirement that they report their business to the regulator.

But many other countries have taken a dim view of Japan’s track record concerning the ivory trade. The resolution submitted by the nine African countries billed Japan’s ivory market as “one of the largest in the world” and argued that loopholes in Japanese regulations have been promoting illegal trade.

In fact, an investigation by a nongovernmental organization has pointed out a large amount of ivory being smuggled from Japan to China.

Another conservation group has reported that in its secret inquiry of shops dealing in ivory products in Japan, 60 percent of them said ivory products could be taken overseas, which is actually illegal.

These findings raise serious doubt about the credibility of Tokyo’s claim about its regulation of the domestic market.

All this is not to say, however, the best way to deal with the problem is to shut down the domestic market as soon as possible.

The step would be counterproductive if it leads to a thriving underground market, providing a lucrative source of revenue for organized crimes and other anti-social groups.

It is also necessary to take measures to protect and support businesses dealing in ivory seals or Japanese musical instruments containing ivory.

If Japan wants to allow limited ivory trade for such businesses only as exceptions in order to preserve its traditional culture, it has to build a solid system to ensure rigorous regulation and enforcement and make serious efforts to convince other countries of its effectiveness.

Japan’s ivory market has shrunk to one-10th its former size in the past three decades. A growing number of supermarkets and online retailers in Japan are adopting a ban on the sale of ivory.

Consumers should also do their share by stopping to think again whether they really need the ivory products they are planning to buy.