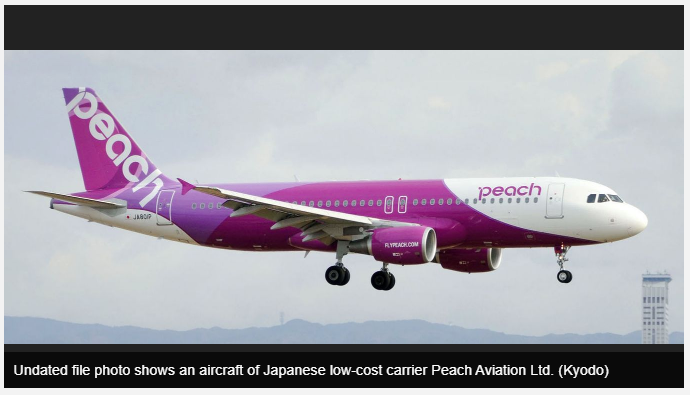 Eight South Korean carriers including Korean Air Lines Co., Asiana Airlines Inc. and Air Seoul Inc., an LCC, have already announced flight suspensions or reduced services to Japan after a fall in the number of South Koreans making the trip.

Peach Aviation said it will indefinitely stop services between New Chitose airport in Hokkaido and Incheon near Seoul from Oct. 28 and Kansai-Busan flights from Jan. 7 due to a lack of demand from South Korea. The New Chitose-Incheon flight was only launched on April 25.

Naha-Incheon will temporarily be suspended from Jan. 28 to Feb. 22. All three routes currently have one round-trip per day.

“We’ve taken the decision after holistically judging the situation, including the deteriorating South Korean economy and depreciation of the won,” a Peach official said.

Kansai-Incheon flights will be reduced to three round-trips per day from four between Nov. 11 and Dec. 8, according to the subsidiary of ANA Holdings Inc. Haneda-Incheon, the remaining route provided by the carrier between the countries, will be maintained as is.

The Asian neighbors’ ties have sunk to their lowest level in years after Japan tightened export rules to South Korea, which Seoul views as retaliation for court rulings ordering Japanese firms to compensate groups of South Koreans over wartime labor issues.