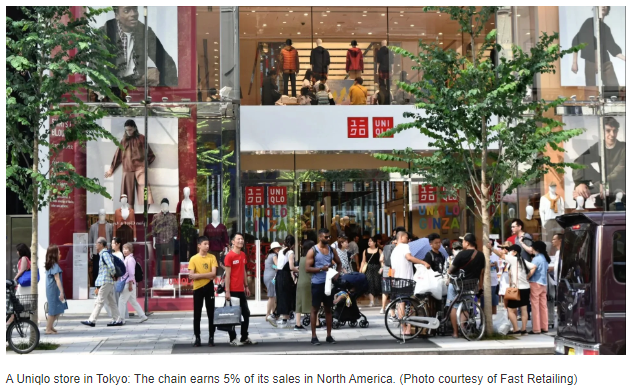 TOKYO — With the U.S. enacting another round of tariffs on Chinese goods Sunday, Japanese companies that have production in China are scrambling for alternatives to minimize the fallout from the trade war.

An additional 15% tariff was imposed on 3,243 items, including many consumer goods like clothing and watches, prompting companies across a wide range of industries to consider shifting production to Southeast Asia and raising prices to cope.

Uniqlo operator Fast Retailing bases much of its production in China and ships goods from there to the 52 stores it operated in the U.S. as of the end of July. The North American market as a whole accounted for about 90 billion yen ($847 million) in sales, or 5% of Uniqlo’s total for the year ended in August 2018.

The tariff war previously affected only a handful of the apparel retailer’s products, such as leather belts. But the latest round imposes higher duties on key items like T-shirts and pants.

“Our U.S. executives have come to Japan so we can discuss the level of impact and how to respond,” a Fast Retailing executive said.

The company is looking at moving some production to Southeast Asian nations like Vietnam and Cambodia, but this shift comes with its own challenges.

“We still rely on China for raw materials, so we could see higher costs in procurement and in shipping the finished products to the U.S.,” a source familiar with the matter said.

Any additional costs could be passed on to customers if Fast Retailing cannot compensate for them.

Photocopiers and all-in-one printers are also now subject to higher tariffs. Kyocera President Hideo Tanimoto said on Aug. 2 that the company will respond by switching the output at its Chinese and Vietnamese plants.

The Chinese factories currently make items for the American market, while the Vietnamese plants produce those for Europe. The goal is to swap them by the end of March.

“We expect a limited effect on our earnings,” Tanimoto said. But adjusting supply chains and other necessary changes could cost the company tens of millions of dollars.

Watchmakers are weighing alternatives as well. Seiko Holdings is considering moving the production of certain items, mostly watches priced under $500, to Japan from China. Citizen Watch is examining a shift to Thailand.

In addition to Sunday’s tariffs, Washington plans to raise duties on $250 billion of China-made products to 30% from 25% in October. Kasai Kogyo, which currently ships molds for car door parts from China to its American plant, estimates millions of dollars in added costs.

“We are preparing to first send molds made in China to Japan, where they will be processed before being shipped to the U.S.,” Kasai President Kuniyuki Watanabe said.