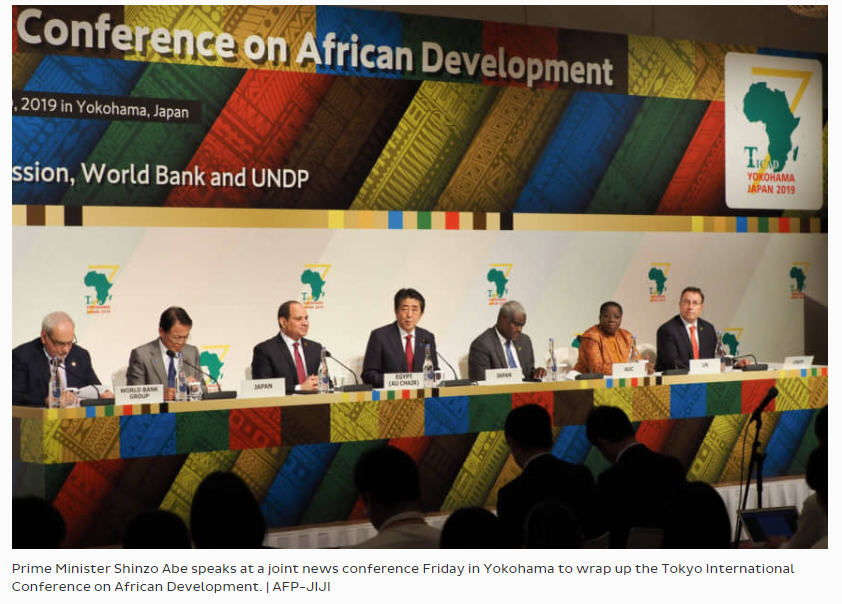 But the policy papers and remarks by Japanese officials suggested Tokyo was pursing an unofficial agenda at the Tokyo International Conference on African Development: how to differentiate Japan’s economic cooperation from that of China, which has long surpassed Japan as a massive business investor in the continent’s rapidly growing economies.

The Yokohama Declaration drafted by Japan called for “quality infrastructure investment,” which experts say is a veiled criticism of Beijing infrastructure projects that often come with high-interest loans and are criticized as “debt-trap diplomacy.”

It also said the African leaders “take good note of” Prime Minster Shinzo Abe’s Free and Open Indo-Pacific initiative, which calls for freedom of navigation and rules-based order in the sea.

The initiative is widely seen as part of Abe’s efforts to keep growing Chinese clout in check, although Tokyo has officially denied that characterization.

Thus, for the Japanese version of the joint declaration, Japanese officials translated the phrase “take good note of” as kōiteki ni ryūi suru, which roughly means “favorably take note of.”

Japan’s efforts to differentiate itself from China started long before TICAD 7, which drew 42 African heads of state, presidents, vice presidents and prime ministers.

To compete with Beijing on international infrastructure projects, Tokyo has carefully prepared and promoted the concept of “quality infrastructure.”

At the G20 summit in Osaka in June, Tokyo drafted a document calling for “quality infrastructure investment” and attached it to the Osaka joint declaration that was endorsed by the G20 leaders.

The paper urges the G20 countries, including China, to attach importance to the fiscal sustainability of a recipient country when extending loans for infrastructure projects.

“A country that is deeply indebted is a country difficult for you to penetrate,” Abe told Japanese and African business leaders at Thursday’s plenary session in Yokohama.

Abe then revealed a plan to dispatch experts to 30 African countries to train local officials in charge of sovereign debt and risk management.

It may be rather ironic that Japan, which is neck-deep in snowballing government debt, has decided to teach African officials how to manage the same. But a Japanese official claimed that some African countries want Japan to serve as “a counter-balance” against China and to dispatch such fiscal experts to them.

At the same time, some Japanese officials admitted that Tokyo can no longer compete with China in terms of the amount of funds funneled into the continent, which is why they have started emphasizing the “quality” of its economic projects.

More than 3,700 Chinese firms are reportedly doing business in Africa and about 1 million Chinese are living there, while Japanese firms have offices at just 800 locations. About 8,000 Japanese live in Africa.