The mystery of low inflation despite huge debt 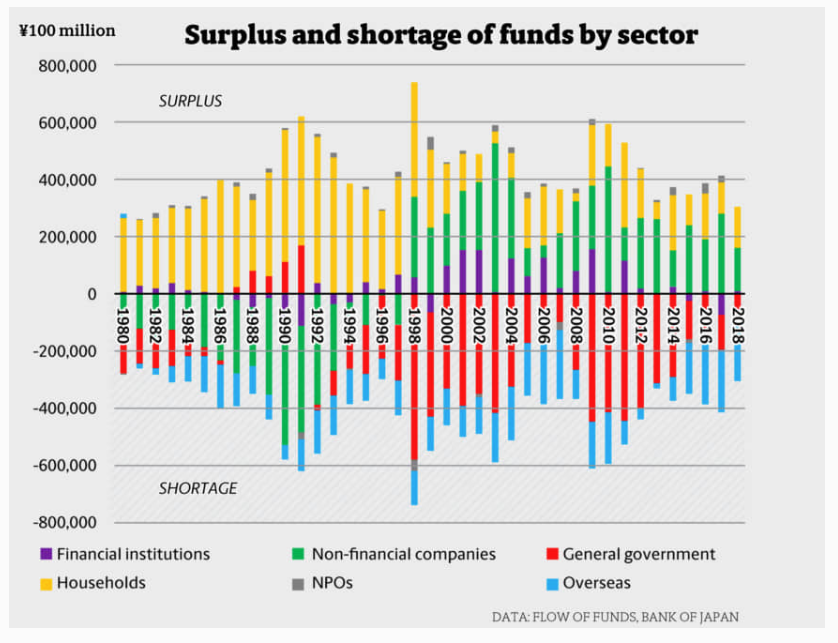 KYOTO – Stephanie Kelton, a professor at the State University of New York at Stony Brook, is a leading advocate for Modern Monetary Theory who is known for her seemingly radical argument that as long as a government can pay back its debt in the nation’s own currency, there are no limits to the fiscal deficits that it can incur. She stirred up a controversy when she cited Japan’s situation as evidence to prove her theory.

A stereotypical criticism of MMT is that inflation will rise if fiscal deficit expands in an uncontrolled manner. As a rebuttal to this criticism, Kelton pointed out that Japan has no inflation at all even as its budget deficit accumulates every year and the balance of government debt tops 200 percent of the nation’s GDP.

To put it briefly, it is the savings excess that continues for so long in the private business sector. The chart — the Bank of Japan’s flow of funds table — shows the yearly changes of deficiency and excess in funds at Japan’s main sectors: households, non-financial businesses, financial institutions, general government, overseas and others.

The changes in each sector’s fund balance eloquently tell the structural change that took place in Japan’s economy in the 1990s.

For example, the non-financial business sector (or the private corporate sector) changed from a fund deficiency to a savings excess (repaying the debts) in the latter half of the 1990s, a condition that has since continued. Around the same time, the general government sector fell into a fund deficiency (or fiscal deficit) and this condition has become persistent.

In the household sector, the significant savings excess that lasted until the 1990s has shrunk, but the excess still continued even in the 2000s and thereafter. The overseas sector (outside of Japan) has a consistent fund deficiency, which means that Japan has a current account surplus.

In the overall economy, the total fund excess (or savings excess) matches the total fund deficiency. It is a matter of course that the amount of money borrowed matches the money lent. It is not necessarily a bad thing to raise funds (or borrow more money) when you’re short of funds. The economy grows because households take out housing loans to build their homes and companies raise funds to make capital investments (fixed capital formation) and develop new technologies.

Savings are income minus spending. If everybody tries to be in a state of savings excess, the economy will suffer from a deficiency in demand and fall into a cycle of shrinking reproduction.

In Japan, the private business sector was saddled with excessive debts after it made excessive investments during the bubble boom of the late 1980s. In the late 1990s, businesses started deleveraging to adjust this condition. This process was inevitable until the debt excess was eliminated, and it was supposed to be all right if the government in the meantime propped up demand by increasing the fiscal deficit (by incurring debts to raise funds).

However, the 1997-98 financial crisis and serious recession changed business executives’ view of the growth prospects of the Japanese economy for the worse. They turned more cautious toward making capital investments, and the underlying trend of savings excess in the private corporate sector was now here to stay. As a consequence, a persistent condition emerged in which it was feared the economy would shrink due to a shortage of demand unless the government sector made up for the savings excess in household and private corporate sectors combined by incurring a fiscal deficit.

Japan’s current account surplus means that the nation is making investments abroad, which partially alleviate the domestic fund excess. However, this has also added to the fragility of Japan’s economy in that its exports decline when the overseas economy loses steam, thereby causing the domestic economy to sharply fall due to a demand shortage.

The government’s fiscal deficit was preceded by a fund excess in the private business sector. That’s why, despite the massive issuance of deficit-covering government bonds, the yields on JGBs do not rise and interest rates remain at ultra-low levels. But that does not necessary mean that it’s OK for Japan to keep on incurring fiscal deficits.

The postwar baby boomer generation, now in its early ’70s, will soon join the ranks of the “latter-stage” elderly who are 75 or older and start tapping into their savings to cover their expenses. The trend of excess fund in the private corporate sector may also change over the long term. In that case, government debts that have piled up in massive numbers may become unsustainable with domestic savings alone. If the conditions change in such ways, JGB prices might crash, sending the bond yields shooting up.

What would be particularly serious would be a collapse of the inflation-adjusted, real-term value of the JGBs, in which case the private sectors that hold the government bonds would suffer enormous losses. Given such a risk, fiscal reconstruction from a long-term perspectives is still essential to keep the fiscal balance and government debts at sustainable levels.

Masaharu Takenaka is a professor of economics at Ryukoku University in Kyoto.