TOKYO — The Japan Aerospace Exploration Agency (JAXA) is gearing up to develop technology for use in the United States’ future moon-orbiting “Gateway” space station, with the Japanese science ministry seeking development funds from next fiscal year’s budget.

JAXA will develop equipment connected with maintaining life on the space station, officially known as Lunar Orbital Platform-Gateway, in addition to cargo transporter technology, utilizing its past experience. 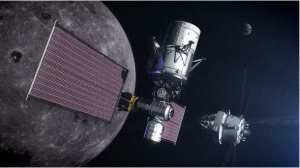 The United States is pushing ahead with its Artemis crewed spaceflight program that aims to take astronauts to the moon by 2024, and will build the first version of Gateway as a base for moon landings by that year. It is calling for international participation in the project, and the Japanese government is set to formally announce its participation as early as this year.

It is envisioned that the equipment developed by JAXA will be provided to a U.S. aircraft manufacturer delivering a habitation structure to NASA. Japan’s Ministry of Education, Culture, Sports, Science and Technology has requested 1.16 billion yen for next year’s budget.

Additionally, the successor to the Kounotori cargo transporter that JAXA is developing to deliver supplies to the ISS will be modified to be able to service the Gateway station. When docking at the ISS, an astronaut needs to operate a robotic arm, but there will be no arm aboard the Gateway, and at times it will be unmanned. For this reason it was decided to equip the cargo transporter with automatic docking technology. The cost of 10.8 billion yen for the development of Kounotori’s successor has been included in the budget request.

Yoshiyuki Kasai, chairman of Japan’s Space Policy Committee, commented, “In terms of scientific technology, industrial technology and national security, there is no option but for Japan to participate in the Gateway project. We need to work out in the future just how much Japan can contribute in which fields.”