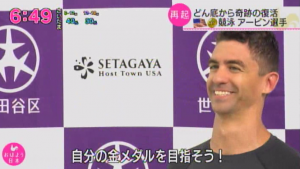 NHK aired a report this morning on Anthony Ervin, the American gold medalist in freestyle swimming in the 2000 Sydney Olympics and the 2016 Rio de Janeiro Olympics. After winning the gold in Sydney and another gold medal at the world championships in 2001, he succumbed to the pressure of being a celebrity, particularly the media’s focus on the fact that his father is African American and he was competing in a sport dominated by white athletes. He retired from competition at the age of 22 and became addicted to alcohol and drugs, but decided to return to swimming fo 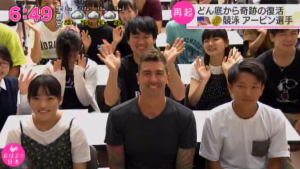 llowing the experience of teaching children to swim seven years later. He made a spectacular comeback, becoming at the age of 35 the oldest swimmer to win an Olympic gold medal when he came in first in Rio de Janeiro. Ervin came to Japan last month to hold swimming clinics for children in Osaka and Tokyo. He is now aiming to win a third gold medal in the 2020 Tokyo Olympics.