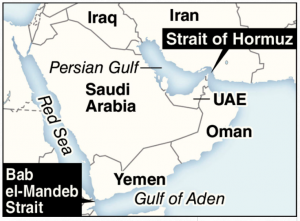 In the case of having to dispatch the Self-Defense Forces to ensure safety in waters off Iran including the Strait of Hormuz, the government is considering sending a Maritime Self-Defense Force destroyer separately from a U.S.-proposed maritime security initiative, The Yomiuri Shimbun has learned.

Such a mission would be to collect information in the area based on a provision regarding survey and research activities under the Defense Ministry Establishment Law. The government is expected to make a final decision on the dispatch after the U.N. General Assembly meeting to be held in New York later this month.

According to several sources, the government’s current plan is to perform the mission in areas around the Strait of Hormuz, in the Bab el-Mandeb Strait off Yemen, and elsewhere. If Iran gives its consent, the Japanese government plans to expand the scope of its mission to the Strait of Hormuz itself. Since the mission is mainly to gather information for marine monitoring, an MSDF destroyer will not, in principle, escort Japan-related ships. Japan plans to share such information as navigation conditions or existence of any suspicious ships with the U.S. military and other entities involved.

The MSDF currently has dispatched one destroyer and two P-3C patrol planes for activities to crack down on pirates in the Gulf of Aden off Somalia. The destroyer in the gulf is replaced every several months, so the government is considering having the next destroyer from Japan stop by the Middle East for the independent mission around the Hormuz.

U.S. President Donald Trump has called on Japan and other countries to join the U.S. initiative to ensure the safety of the Strait of Hormuz and other areas, and has insisted that each country must protect its own ships.

In response, the Japanese government began discussions in early July on the possibility of dispatching a destroyer that can escort Japan-related ships based on a provision on maritime surveillance under the Self-Defense Forces Law. But Prime Minister Shinzo Abe stressed that Japan aims to ease tensions surrounding Iran through diplomatic efforts. If Japan participated in the U.S. initiative, Japan’s relationship with Iran would turn bad. Based on this assumption, the Japanese government brought up an idea in early August to dispatch an MSDF destroyer on its own with the purpose of information gathering.

Since Trump did not ask Japan to participate in the initiative during a Japan-U.S. summit meeting held in Biarritz, France, on Aug. 25, Japan has concluded that the United States would accept Japan’s plan to collect information by sending its vessel independently.

Japan-related ships are now sailing through the Strait of Hormuz without escort and the Japanese government deems that the situation in the waterways is not extremely dangerous. In the event that a Japan-related vessel is likely to be attacked, the destroyer dispatched to the area will take all possible measures, including the use of arms within the bounds of self-defense and emergency evacuation.

Abe is seeking a meeting with Iranian President Hassan Rouhani on the sidelines of the U.N. General Assembly. Tokyo will convey Japan’s stance to Tehran to gauge Iran’s response, then take into account the situation in the Strait of Hormuz and U.S.-Iran relations, before making a final decision on whether to send the destroyer to the waterways independently.