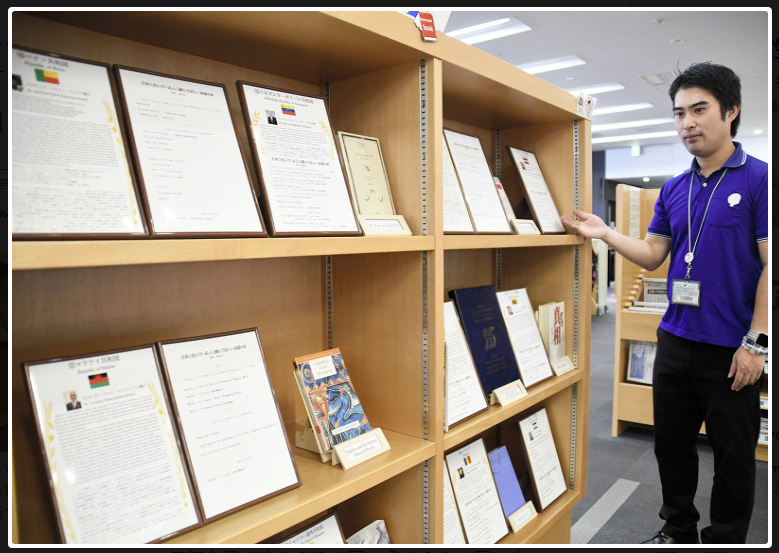 Edogawa Ward Shinozaki Library is holding a special exhibition to introduce books recommended by the ambassadors of various countries. A message from the ambassador is presented alongside each book.

Edogawa Ward Shinozaki Library (7, Shinozaki-machi, Edogawa Ward [Tokyo]) is now holding a special exhibition to introduce the favorite books of ambassadors from around the world. With one year to go before the Tokyo Olympic and Paralympic Games, the library planned the exhibition with the aim of encouraging people to take interest in other countries through books, and visitors seem fascinated by the exhibition.

The exhibition is titled, “Ambassador’s recommendations: The book from my country that I would like Japanese people to read.” Ambassadors from 31 of the 160 countries which have embassies in Japan sent in submissions, and the event displays 30 books recommended by the ambassadors.

The Vatican’s ambassador recommended the “Bible,” and the Indian ambassador suggested the “autobiography of Mahatma Gandhi.” The Lithuanian ambassador chose a book on Chiune Sugihara, who saved the lives of refugees during World War II by issuing them visas at the Japanese consulate in Lithuania.

The exhibition also showcases messages from the ambassadors translated into Japanese. The Brazilian ambassador wrote, “I hope many people will learn about foreign countries and their cultures.” The ambassador of Malawi, a country in southern Africa, wrote, “Please watch our traditional dance and visit (Malawi’s) national parks and reserves.”

The exhibition is recognized by the Tokyo Organising Committee of the Olympic and Paralympic Games as part of the “Tokyo 2020 Participation Program.”

The special exhibition runs through Sept. 23. The library will be open 9:00 a.m. to 9:30 p.m. every day until the exhibition ends. (Abridged)