64% of Japanese write their given name first in Roman letters, Yomiuri poll 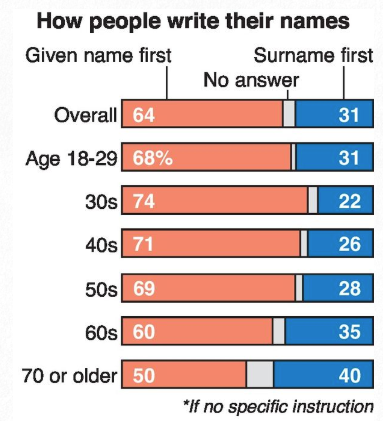 Sixty-four percent of Japanese people who responded to a nationwide survey by The Yomiuri Shimbun said they write their given name before their surname, when writing in Roman letters, unless the order is specified.

The figure substantially exceeded the 31 percent of those who write their surname first, which is the same as when writing in Japanese. The result shows that the Western style order is widely established.

By occupation, 70 percent of the self-employed in the commercial and industrial sectors and freelance professionals said they write their given name first, and the figure was 69 percent for salaried employees, accounting for a high percentage. By gender, the figure was 66 percent for men and 62 percent for women.

On the other hand, accounting for relatively high percentages, 37 percent of homemakers and 36 percent of the unemployed said they write their surname first. The figure was 30 percent for men and 32 percent for women.

In May, Education, Culture, Sports, Science and Technology Minister Masahiko Shibayama and Foreign Minister Taro Kono announced their policies respectively at press conferences to recommend the writing of surnames first. 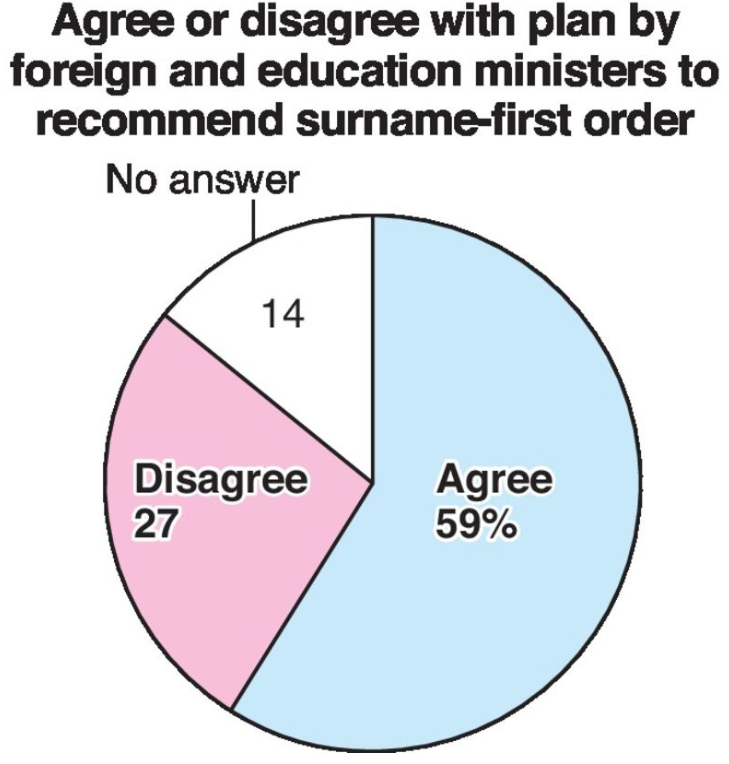 The government is considering standardizing the writing of surnames first on official national documents, and also recommend the order to the private sector.

Chief Cabinet Secretary Yoshihide Suga said at a press conference on Tuesday, “The Cultural Affairs Agency is currently coordinating with related ministries and agencies for that purpose.”

Following the ministers’ policy announcement, the survey targeting 3,000 eligible voters was conducted from July 22 to Aug. 26 by mail. Of them 1,935 answered, making the response rate at 65 percent.