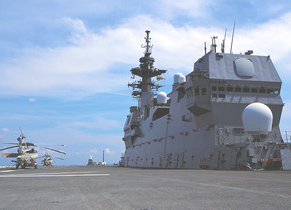 The Maritime Self-Defense Force’s largest destroyer is going through changes–chief among them a retrofit of the deck that will enable not only helicopters, but also fixed-wing aircraft to take off and land.

The government is moving forward with the plan, having earmarked costs related to needed repairs for such capabilities in its fiscal 2020 budget request.

The retrofit will effectively turn the Izumo into an aircraft carrier, although there are some concerns that its new role could diminish or even contradict some of its originally intended functions.

An Asahi Shimbun reporter boarded the Izumo in late June for six days during its joint training exercises off the coast of the Southeast Asian nation of Brunei, which faces the South China Sea.

The nation was the fourth port of call for the Izumo during what would become an approximately 70-day journey.

During the exercises with a Brunei Navy patrol ship, similar to those held with the navies of other neighboring countries since late April, the Izumo took part in various formations.

In the background of such activities is the presence of China and its aggressive moves in the South China Sea, including the construction of military installations.

The Izumo also engaged in the first-ever joint training exercise with Japan Coast Guard ships in the South China Sea.

“It’s extremely difficult for a single nation to stabilize this very wide area and to guard against any unilateral change in the status quo,” Egawa said. “Cooperation with the various navies in the region will be key.”

The Izumo had a crew of about 470, and not all members belonged to the MSDF. About 30 members of the Ground SDF’s Amphibious Rapid Deployment Brigade, established last year, joined the destroyer on its latest missions.

Maj. Yasukazu Tanaka, 47, who led the GSDF contingent, said, “The terminology used on a daily basis is totally different from what we are used to.”

When the Izumo was commissioned in 2014, it already had a flat deck to allow patrol helicopters to land and take off. The ship was large enough to hold up to seven such choppers.

However, it is now being retrofitted to allow short take-off and vertical landing aircraft to use the ship.

Although the government formally decided on the retrofitting plan toward the end of 2018, Defense Minister Takeshi Iwaya took pains to explain that such a vessel would not constitute an attack aircraft carrier, which would run counter to the pacifist principles of the Constitution.

Some believe otherwise, however. Gen. David Berger, the commandant of the U.S. Marine Corps, said the main objective of upgrading the Izumo was to allow for U.S. Marine pilots to land on MSDF ships at the same time that SDF pilots were allowed to land on U.S. Navy carriers.

However, some high-ranking MSDF officers are worried about fostering personnel capable of landing fixed-wing aircraft because of how different it is from piloting helicopters.

Another officer raised concerns that the MSDF’s ability to search for enemy submarines–a major role of the patrol copters initially based on the Izumo–would be compromised.

Capt. Katsuyoshi Motoyama, commander of the Izumo, was very careful in explaining the future role of his ship.

“I believe that various studies will have to be conducted to successfully incorporate new functions that were neither included nor even considered in the initial design of the ship,” he said.

Tatsuo Tomono, who is in charge of preparing meals for the crew, said his biggest worry is trying to meet the different preferences of crew members.

While curry is offered on Fridays, as per MSDF tradition, he said, “We prepare a mild version and then provide seasoning so that members can adjust it to their liking.”

A handful of technological advantages will add convenience to life on the ship, including a Wi-Fi area so crew members can connect to the Internet and e-mail family and friends using their devices.

A veteran crew member said, “We no longer live in a time, as in the past, when we were incommunicado once we left port.”

As part of efforts to make sea life with the MSDF more attractive to younger people, the Izumo also has vending machines offering everything from juice and tea to ice cream.