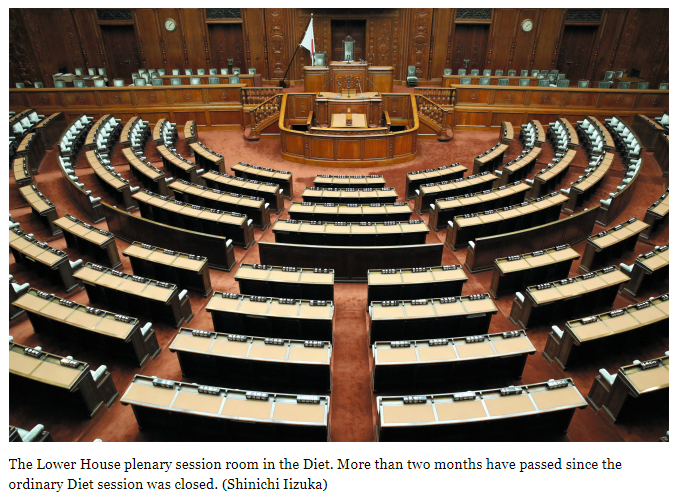 Two months have passed since the end of this year’s regular Diet session, but the government and ruling camp continue to keep the parliament in summer recess despite a long list of tough and urgent policy issues on the domestic and diplomatic fronts that are waiting to be addressed.

Even though the government and ruling camp are preparing to convene an extraordinary Diet session on Oct. 4, we urge the Abe administration to implement it much earlier so serious debate can begin on these issues before the public.

The administration sought to delay the start of the session to October because of Abe’s plan to reshuffle his Cabinet and replace some top executive positions in the ruling Liberal Democratic Party next week and scheduled visit to New York to attend the U.N. General Assembly meeting, which starts on Sept. 17.

The ruling camp shows no willingness to respond to an opposition request for special deliberations while the Diet is out of session.

The extraordinary session held after the July Upper House election was very brief. Besides performing such formalities as choosing the new president and vice president of the chamber, the Diet held no substantial policy debate during the session.

Keeping the Diet in recess until October means that there will have been no substantial policy debate for more than three months. The legislative branch cannot properly perform its important role as watchdog of the administration if its members are unable to hold deliberations for such a long time.

In the meantime, Japan’s ties with South Korea have deteriorated sharply due to the issue of compensation of wartime Korean laborers brought to Japan to work at factories and mines and Japan’s move to impose tighter control on exports to South Korea.

The latest round in the feud led Seoul to scrap a vital intelligence-sharing agreement with Japan called the General Security of Military Information Agreement (GSOMIA).

Lawmakers have a duty to figure how to avoid a further escalation of the row and find a way to improve the situation.

Details of the trade agreement recently reached between Abe and U.S. President Donald Trump have yet to be revealed.

The public deserves to know what kind of concessions Japan has made for what gains in the trade deal, which has a direct bearing on their livelihoods.

The agreement should be discussed at the Diet before it is signed by the two governments, possibly in late September.

No notable progress has been made in uncovering the truth about serious political scandals involving Moritomo Gakuen and the Kake Educational Institution, two school operators directly or indirectly linked to Abe. The scandals have seriously undermined the credibility of the process of administrative decisions.

Last month, Osaka prosecutors closed their investigation into the dubious sale of state-owned land to Moritomo Gakuen as well as the Finance Ministry’s tampering and discarding of official documents related to the transactions, without handing down any indictments.

Nobuhisa Sagawa, who served as director-general of the Finance Ministry’s Financial Bureau at the time of the shady land sale, refused to answer many related questions at the Diet on grounds he might incriminate himself and face criminal prosecution. Summoning Sagawa again to the Diet to explain the facts would be a good place to start for efforts to restore public confidence in the ministry and the administrative process.

Other vital policy issues include how the government should deal with the effects of a scheduled rise in the consumption tax rate on Oct. 1 and pension reform based on the results of the government’s latest five-year review of the long-term fiscal prospects for pension benefits, which were finally published on Aug. 27.

The Diet also needs to discuss its responses to the resignation of parliamentary vice health minister Hiroshi Ueno over allegations he sought payments from a staffing service company to help foreign workers obtain visa status certificates and Hodaka Maruyama’s latest remarks suggesting war as a means to solve a territorial dispute that followed a similar outburst a few months earlier that sparked a public outcry and drew a unanimous vote of condemnation by the Lower House.

Despite all these weighty, urgent issues that the Diet should tackle, the Abe administration is reluctant to engage in policy debate on the Diet floor, a stance that reflects its now familiar tendency to make light of the government’s accountability to the Diet.

The Abe administration has simply ignored opposition requests for an extraordinary Diet session and Budget Committee sessions, which were based on a constitutional provision and Diet rules, respectively.

But Abe has been pressing the opposition camp to respond to his call for debate on constitutional amendments. That is nothing but opportunism.

In an Asahi Shimbun survey after the Upper House election, the largest number of respondents, or 38 percent, cited “pension and other social security programs” as the policy area they wanted him to focus on. Only 3 percent of the respondents cited “constitutional amendments.”

The administration should not misjudge the priorities among the policy challenges the Diet should tackle now.