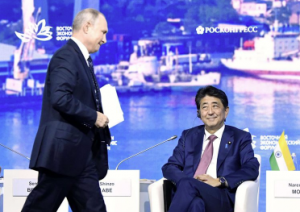 All national dailies wrote that following their bilateral talks in Vladivostok on Thursday, Prime Minister Abe and Russian President Putin spoke at a plenary meeting of the Eastern Economic Forum held there on the same day. According to the papers, Putin expressed opposition to Japan’s plan to deploy the Aegis Ashore system by warning that the deployment will affect peace treaty negotiations between Tokyo and Moscow. He also expressed concern over the possibility of the United States deploying mid-range missiles in Japan and South Korea. Prime Minister Abe reportedly stressed that Japan will only use the Aegis Ashore system for the purpose of intercepting missiles and not for launching attacks and that Tokyo has heard nothing about missile deployment from Washington. Sankei wrote that Putin expressed the view that there are many challenges to signing a peace treaty with Japan, including Japan’s security treaty with the United States. The paper wrote although Abe stressed progress in Japan’s economic cooperation with Russia at the forum, there is concern that the Northern Territories issue will be put on hold.