No progress made in Abe-Putin talks on peace treaty discussions 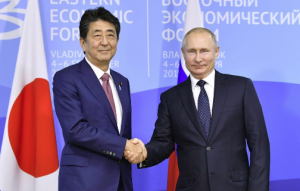 All national dailies reported on bilateral talks between Prime Minister Abe and Russian President Putin in Vladivostok on Thursday. The papers wrote that although the two leaders agreed to move forward with discussions on the Northern Territories and a peace treaty in a “forward-looking” manner, they failed to produce tangible progress but agreed to meet again on the sidelines of an APEC leaders’ meeting in Chile in November. According to the papers, Abe and Putin spoke one-on-one for 20 minutes and later held an expanded meeting with their foreign ministers and other officials for one hour.

Asahi speculated that Putin is taking a tough position on the Northern Territories for domestic political reasons because anti-Putin sentiment is growing in Russia ahead of the municipal and regional parliamentary elections to be held on Sept. 8. Yomiuri expressed a similar view, noting the frequent anti-government rallies. The paper wrote that there is no sign of Russia making concessions on the Northern Territories, as Russian Prime Minister Medvedev visited Etorofu, the largest of the four islands, in August. Mainichi asserted that there are limits to Abe’s strategy to resolve the Northern Territories issue based on his personal relationship of trust with Putin and it will be difficult for him to achieve his goal of concluding a peace treaty with Russia before his term as LDP president expires in September 2021.