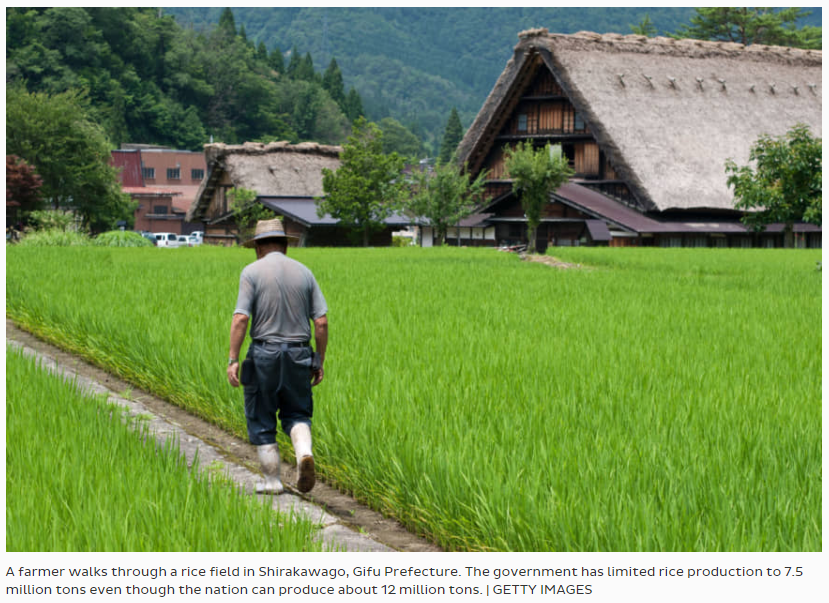 The agriculture ministry has announced that Japan’s calorie-based food sufficiency rate in fiscal 2018 has fallen to a record low 37 percent. The rate is calculated by dividing domestic food production by the amount of food consumed, including imports.

Given today’s style of food consumption, characterized by the habit of eating to satiation while wasting massive volumes of leftover food, it is only natural that the rate is low since the denominator is large.

If the modest style of food consumption that was prevalent 40 years ago was used as a premise, the rate would rise greatly even with today’s level of output. Depending on the size of the denominator, the rate goes either up or down.

Some people point out that the food self-sufficiency rate would rise to more than 60 percent if it was calculated on the basis of the monetary value of food instead of the calorie basis, because that would give greater weight to low-calorie products such as vegetables and fruit. But as long as consumption is used as the denominator, the same problem would arise.

Since 2000, the government has sought to raise the nation’s food self-sufficiency rate as a policy goal, setting the target rate originally at 45 percent, then 50 percent in 2010 under the Democratic Party of Japan-led administration and then setting it back to 45 percent in 2015.

The rate, however, keeps falling instead of rising. Under normal circumstances, the ministry or the agency and its senior officials in charge would have to take responsibility if a policy target approved by the Cabinet was not achieved after so much time was spent on it.

But the Agriculture, Forestry and Fisheries Ministry does not seem ready to take the blame or be even ashamed of its failure to achieve the target. On the contrary, the ministry would be in trouble if the food self-sufficient rate went up because that would weaken the grounds for taking measures to protect domestic agriculture.

People would feel uneasy if they are told that the nation depends on imports to supply more than 60 percent of the food it consumes, and would support measures to shore up the prices of farm products and increase subsidies to boost agriculture output. The concept of food self-sufficiency is the agriculture ministry’s most successful propaganda to increase protection for domestic farming.

What would happen to Japan’s food self-sufficiency rate if a military conflict took place in areas surrounding the nation, disrupting sea lanes and blocking imports, causing a food crisis and leaving people to die of hunger? Because imports have been stopped, domestic food production would equal consumption, thus pushing up the self-sufficiency to 100 percent.

Indeed, if the concept of food self-sufficiency rate is meaningful, have Japan’s agricultural policymakers taken any action to improve the rate? No. They have done exactly the opposite.

The policy of reducing rice production acreage was intended to raise prices by cutting the output of rice to 7.5 million tons, even though the nation has the capacity to produce up to about 12 million tons. Without the policy, the output of rice would increase and raise the food self-sufficiency rate. If the domestically grown rice was exported, the self-sufficiency rate would top 100 percent because the output would exceed domestic consumption.

Japanese consumers have been forced to shoulder the burden of higher food prices resulting from agricultural protection.

Maintaining high domestic prices requires high import tariffs. If farmers were protected in the form of direct payments from the government’s coffers, as is done in the United States and the European Union, their income would not be affected even if food prices decreased. However, JA agricultural cooperatives would be in trouble because the fall in farm product prices would reduce their sales commission revenue. In short, Japan’s agricultural policymakers have pushed for maintaining the high prices of farm products for the sake of JA agricultural cooperatives, thus lowering the nation’s food self-sufficiency rate.

Food security is an issue concerning how high an output of edible farm products is needed at minimum to ensure people’s subsistence when the nation is unable to buy food from overseas. When food cannot be imported from abroad, there can be no consumption of beef, pork or cheese to the point of satiation.

What is most needed to supply food to people when imports are suspended are agricultural resources such as land. Right after World War II, warehouses of the Agriculture and Forestry Ministry had enough food stockpiled to keep the residents of Tokyo fed for just three days. In addition, the rice harvest in 1945 was very poor.

People coped with hunger by turning elementary school playgrounds into fields to grow sweet potatoes. To prepare for a food crisis today, plans to increase production by converting golf courses and athletic fields into farmlands would need to be put in place. However, the government has never even considered such a plan.

Similar problems are emerging in the rest of the world. It is argued that global food output must increase by 60 percent by 2050 because it’s estimated that the population will rise by 2.2 billion — from 7.4 billion today to 9.6 billion. Such arguments are made by the United Nations Food and Agriculture Organization and industrial sectors that supply agricultural materials such as fertilizers and agrochemicals.

If a steady and gradual population increase will cause a food crisis by 2050, then world food prices are sure to increase year by year. However, grain prices have steadily declined in real terms over the past 150 years. In the two decades from 1985 to 2005, prices were at roughly half the level of 1960.

A 60 percent increase in food output by 2050 would need only a 1.4 percent increase annually. Assuming that food production will continue to increase at the average annual rate of growth between 2000 and 2016, the output of rice is projected to expand 59 percent, wheat 79 percent, soybeans 404 percent and corn 262 percent, by 2050.

The U.S. Agriculture Department has changed its stance and now says that thanks to economic development, supply increases and real-term decline in food prices, the proportion of the world population facing food insecurity will decline from 21.1 percent in 2018 to 10.4 percent in 2028.

Food is indispensable for sustaining people’s lives and health. By fanning a sense of insecurity over food supply, people and organizations involved in agriculture have tried to expand the protection of resources for farming. When they talk about food insecurity or a food crisis, we need to make a cool-headed judgment.

Kazuhito Yamashita is research director of Canon Institute for Global Studies and a senior fellow of the Research Institute of Economy, Trade and industry.